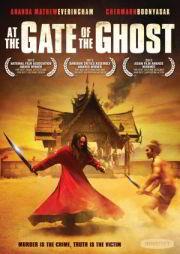 Well, here is a Kurosawa remake that almost slipped past the radar. It’s called At the Gate of the Ghost, or U mong pa meung in its original Thai, and has apparently also been screened as The Outrage.

Originally theatrically screened in 2011, the Rashomon remake will be out in the US on DVD and Blu-ray with English subtitles on April 16, 2013. That is, tomorrow.

From what I have been able to gather (the sole review on IMDb is particularly descriptive), the film is based on a stage play by the Thai playwright Kukrit Pramoj, which in turn is based on Kurosawa’s Rashomon. It features a young monk who, together with a commoner and a beggar, seeks shelter from a storm in a deserted burial tunnel. A warlord has recently been murdered, and the three discuss the fairly out of the ordinary trial where three conflicting accounts have been heard: one from the accused murderer, another from the warlord’s wife, and finally one from the murdered warlord himself — with the help of a shaman. At the end, the young monk is left to ponder over the meaning and the truth behind not only the murder trial, but his monastic path as well.

All in all, everything points to a fairly straightforward Rashomon remake, although the alternative English title as well as some of the story elements seem to suggest that the creators were definitely also aware of Martin Ritt’s 1950 Rashomon remake The Outrage.

At the Gate of the Ghost was directed by M.L. Pundhevanop Dhewakul and stars Mario Maurer, Ananda Everingham, Chermarn Boonyasak, Phongpat Wachirabanjhor, Phettai Wongkamlao and Dom Hetrakul. My knowledge of Thai cinema is fairly limited, but my understanding is that the cast and crew are fairly big names in the local industry.

Reviews have praised the film’s visuals and action sequences, and the film has also won awards for its costume design, visual effects and art design. The blu-ray release has similarly been congratulated for its transfer, especially when it comes to the film’s vibrant colours. Where the film apparently succeeds less well is in its story telling department. Based on the reviews, At the Gate of the Ghost fails to introduce anything new to the Rashomon story with which it would differentiate itself from Kurosawa’s original, and it is therefore automatically forced into the perhaps impossible task of simply trying to better the original film. For more information, you may want to read the reviews from dvdfile.com, mediamikes.com and dvdsnapshot.com.

Edit: For my take on the film, check out Review: At the Gate of the Ghost.

Tagged with at the gate of the ghost, m.l. pundhevanop dhewakul, rashomon, remake