Free Kurosawa on Hulu for one day (US only) 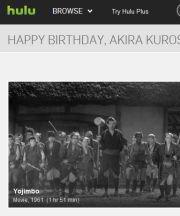 Just for our American members*, Hulu.com is celebrating Kurosawa’s 113th birthday on March 23 by making the Kurosawa films released by Criterion free to watch for one day.

Not all of Kurosawa is there, but the majority of it is, so if there any some that you haven’t seen for a while, or ever, there are worse ways to spend your Saturday than with a Kurosawa marathon.

The selection also includes The Hidden Fortress, which of course is our film club’s current film of the month.

* Well, all Americans, really. I haven’t (yet) been able to strike a deal with Hulu.