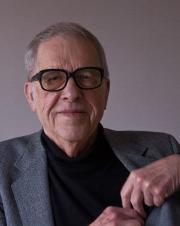 It is with sadness that I must report that Donald Richie, the author of The Films of Akira Kurosawa and so much more on Japanese film and culture, has passed away in Tokyo at the age of 88.

The news was reported on Japan Times, for which Richie wrote regularly for over 50 years. Details about the cause of death are not available, but Richie had reportedly suffered a number of heart attacks in recent years.

For more information about Richie’s work and life, I suggest the nicely compact Wikipedia article.

Although not everything Richie wrote, for instance about Kurosawa, was always fully water tight, his immense influence on not only the promotion of Japanese cinema abroad, but also film studies in general, cannot be overstated.

I am sorry to hear this. Richie’s translation of Seven Samurai, which I borrowed from my local library shortly after seeing the movie for the first time, was my first written-word introduction to the world of Akira Kurosawa. Although you’re right that his assertions about Kurosawa’s films were not always tightly reasoned or supported, he played a big role in making Westerners aware of Kurosawa’s movies, and for that I will always be grateful.

Oh, that’s very sad news. I read his travel book The Inland Sea last month – apart from a few essays it was the first time I read any non-film related writing by him. It was something of a revelation – apart from finding the book fascinating and beautifully written, he seems to have been a very different man from the one I imagined from his film books and dvd commentaries. In fact, he inspired me to go to some of the islands he wrote about, its my plan to do this next year.

Apart from that, I’ve found his writings on Kurosawa and Japanese film in general to be wonderful (despite the misgivings we all know about the academic rigorousness of his work). I always like the way he applied a wider knowledge of art, society, history and culture to his writings, rather than getting too tied up in conventional film criticism. Plus he seemed to genuinely love what he wrote about, and never pretended that he had any sort of emotional detachment from his favourite films.

I’d always wondered if he occasionally browsed this website, I’m sure he must have been aware of it. Every time I was tempted to say something a little negative about his books in a comment, I always hesitated, wondering if he would see it.

There is a nice obituary in the NY Times.

Thanks for the link to the New York Times obituary, Ugetsu. So, it was his heart that failed.

I think that I definitely need to get some of his non film related books, now. How the obituary describes his status in Japan, with Richie rejecting his home country but deciding not to really become part of his adapted society, sounds very familiar and understandable to me.

He was of course also something of an experimental film maker. Wikipedia in fact lists a 1975 documentary film simply titled “Akira Kurosawa”. I don’t think I was aware of its existence before. Anyone here seen it?

A fun (?) fact: both Kurosawa and Richie died at the age of 88. Although Richie did outlive Kurosawa by 141 days.

The breadth and depth of his interests was extraordinary. Its such a pity that so many of his books are hard to get, The Inland Sea certainly whetted my appetite for more. I hadn’t realised he made a film called Akira Kurosawa – I’m surprised it hasn’t popped up as a dvd extra somewhere. And as for a book called The Erotic Gods: Phallicism in Japan, that sounds irresistible. Its the sort of book I’d love to read in a cafe just to see who will want to come up to discuss it (or more probably, move seat to get as far away from me as possible!).

With the year starting by Oshima and Richie passing away, I have started to wonder when we lose the very last representative member of Japan’s golden age of 50s and 60s film making.

In fact, how many are left and active in what they are known for doing? I can think of Yoji Yamada, who I think is still directing, and Tadao Sato, who I assume is still writing. Any others?

We are really coming to an end of an era.

In fact, how many are left and active in what they are known for doing?

The only one I can think of alive is Seijan Suzuki, and sadly he doesn’t seem to be active anymore. I haven’t seen Princess Raccoon, but Branded to Kill is a lot of fun. I saw the DVD extra for Branded, and he came across as remarkably mischievous for someone nearly 80.

The Japan Times now have a nice long obituary by Stephen Mansfield.

I’ve never seen any films by Seijan Suzuki, not even Youth of the Beast. I guess that should be fixed.

I have just returned from extended travel in SE Asia, India and China…and checking the U of M schedule of Japanese films, saw the news about Donald Richie. I guess I have been out of hte loop in this forum.
Here is Peter Larsen’s article:
http://www.ii.umich.edu/vgn-ext-templating/v/index.jsp?vgnextoid=1aa7124fbbc1d310VgnVCM100000c2b1d38dRCRD&vgnextchannel=9008a5d475dbf210VgnVCM10000055b1d38dRCRD&vgnextfmt=detail

Great to have you back here, Coco, your trip sounds amazing, hope it all went well.