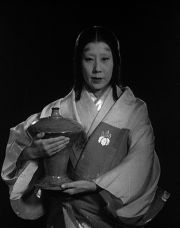 Actress Isuzu Yamada has passed away on Monday at the age of 95. She is probably best known for us as Lady Washizu in Throne of Blood, and also had roles in The Lower Depths and Yojimbo.

Yamada’s other screen credits include some 120 films, among them those by Mikio Naruse (seven films, including Flowing), Kenji Mizoguchi (Sisters of Gion, Osaka Elegey) and Yasujiro Ozu (Tokyo Twilight). Yamada was also a well-known TV and stage actress, and continued her career into her 80s.

In 2000, Yamada was awarded the Order of the Sacred Treasure, Japan’s highest cultural award. According to Variety, this was the first time an actress had received the award.

I watched Throne of Blood last night (purely coincidence, a friend wanted to watch it with me). A great performance, she seems to have had an incredible career. It hadn’t occurred to me when watching the film the first time that she wasn’t that young – 40 when making the film apparently.