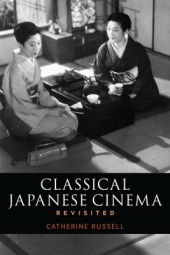 When I first saw the title of Catherine Russell’s Classical Japanese Cinema Revisited: A New Look at the Canon, I pictured a book which sets out to re-evaluate classical Japanese cinema and to offer a new critical framework through which to approach films of the Japanese golden era. The book’s product description seemed to confirm this expectation, mentioning among other things that Russell’s book puts more emphasis on the every-day studio system in which those films were created, while playing down any auteurist or orientalist interpretations.

The book I read was a little different than I expected, however. Not really a re-evaluation of the canon, Classical Japanese Cinema Revisited is in fact a more literal revisit: it is a collection of Russell’s earlier unconnected essays and DVD reviews, only slightly revised for the book’s publication. Consequently, the work lacks any strong unifying thesis or narration. Russell’s voice is of course present throughout, as are themes of gender and style, to which Russell returns in almost every chapter.

After a short Preface and a 19 page Introduction, the bulk of the book is divided into five chapters which cover the four major directors of the era (Ozu 34 pages, Mizoguchi 16 pages, Kurosawa 34 pages, Naruse 30 pages) and three war films made in the post-war era (16 pages). This is followed by a short Conclusion (4 pages), Notes, Filmography, Bibliography and Glossary.

While the book provides fairly good introductions to the directors and films that it discusses, none of the chapters attempt anything like a thorough evaluation. The fact that the individual sections were originally written as DVD reviews (of mainly Criterion titles) is often very clear, with Russell discussing print quality and devoting plenty of space to the DVD extras included in the releases. As a result, most of Classical Japanese Cinema Revisited reads more like a companion piece to Criterion DVDs than a book with its own identity or agenda. The main exception to this is the chapter on Naruse, which I think comes from Russell’s earlier book The Cinema of Naruse Mikio: Women and Japanese Modernity.

As a companion to the films that it discusses, Classical Japanese Cinema is a fairly good work. It points out things to pay special attention to, both in the films themselves as well as on the DVD extras included on the discs, should you be watching the films from the same editions. The book should also work as a stand-alone work on classical Japanese cinema, but not necessarily quite as well.

Classical Japanese Cinema Revisited could easily be recommended to someone new to Japanese film who has access to the films (and DVDs) that Russell discusses. However, it has relatively little to offer for a more seasoned fan of Japanese cinema who has already watched the films (and the DVD extras) and done some other background reading on his own. Neither would I really recommend it to someone who has no access to the films that Russell discusses.

Classical Japanese Cinema Revisited: A New Look at the Canon is available from standard bookshops, including Amazon.com, Amazon.ca, Amazon.co.uk, Amazon.fr, Amazon.de and Amazon.co.jp and The Book Depository.

Hi
I have to agree pretty much with all you say on this book. I was also surprised that the book wasn’t really as described in it’s pre-release press . Once you have the book it’s clear it’s a compilation of previous published essays and reviews .
Having said that if I was trying to recommend a book to someone new to japanese film , I probably would suggest this one , mostly because it’s the first book I have where the text is based around DVD releases , meaning the reader has a good chance to find and actually watch the films they read about.
In the past the first book I really enjoyed that a gave an overview on Japanese cinema was Richie’s ” A Hundred Years of Japanese Film ” ( 2001 edition I think ) but I was always frustrated that I couldn’t actually view most of the films I read about . Things have improved massively in the last decade with Criterion , BFI, Masters of Cinema etc. releasing an ever increasing range of titles and finally including some less well known directors.
If you live in a small town that will never have film festivals , then DVD/Blu-ray is the way that you’ll view japanese film so I thought it was at least refreshingly up to date for a book to cover those films that were available in quality releases.
The problem of not being able to see films you read about is compounded when you come across books like “The Imperial Screen ” ( Peter B High) or ” Mr Smith goes to Tokyo ” (Kyoko Hirano ) and it’s nigh on impossible to find anything mentioned in ” Japanese Documentary Film” (Abe Mark Nornes )

In addition I have Russell’s Naruse book which seems pretty scholarly to me so I figured she had a bit of a track record.
Plus it did work as an advert for Criterion editions through mentioning the extras as it made me purchase Ugetsu ( even though I had the perfectly fine MOC release ) to get my hands on the 1975 Mizoguchi documentary.
thanks