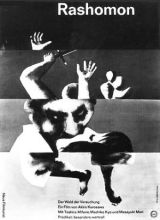 What better way to start a new year than with a fresh new Akira Kurosawa Film Club film, and what better film to do that with than Kurosawa’s 1950 classic Rashomon.

Based on two short stories by Ryūnosuke Akutagawa, Rashomon deals with notions of truth, representation and interpretation. It was the film that opened Western eyes to Japanese cinema by winning the Golden Lion at Venice, and much has been written about it, perhaps more than about any other Kurosawa film.

For a solid basic introduction, the Wikipedia page does a fairly good job. Pretty much all of the books at the Kurosawa book section also discuss the film, with the Donald Richie edited Rashomon perhaps being the go-to work, if you want just one book on the subject.

Plenty of discussion about the film can of course also be found from this website. Rashomon was our very first Film Club film back in 2008, and you can find previous discussion on the work here.

Rashomon is available on DVD with English subtitles in a number of versions. No blu-ray has yet been released.

In February, we will be watching Martin Ritt’s 1964 western The Outrage, which is based on Rashomon and stars Paul Newman. For a full schedule of the Film Club, see here.