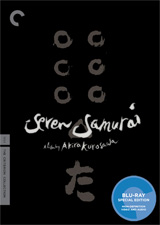 Criterion has announced that it will release Seven Samurai on blu-ray on October 19th. The release was originally scheduled to coincide with Kurosawa’s centenary this spring, but was at the time replaced by Yojimbo and Sanjuro.

While Criterion has not confirmed full details, it looks like no new material will be included in the box set compared to their 2006 DVD package. But considering the awesomeness of that package, the region A (the Americas, parts of East Asia) blu-ray release should nevertheless be nothing less than one of the best high definition releases ever!

More information about the release can be found at Criterion’s website.

If you are looking for more Kurosawa films in high definition, check out Kurosawa on blu-ray. For information about DVD releases, I have compiled a Kurosawa DVD guide.

Thanks go once again to Blah for the heads-up!