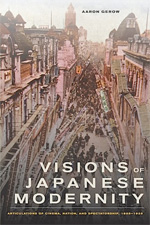 Aaron Gerow’s Visions of Japanese Modernity (University of California Press) is a book about the birth(ing) of Japanese cinema. As its subtitle “Articulations of cinema, nation, and spectatorship, 1895-1925” suggests, it spans roughly the first three decades of Japanese cinema, and has a scope somewhat wider than that of your average book on film history.

One major challenge that writers on early Japanese cinema face is that very few actual films survive from the period. This is evident also with Visions of Japanese Modernity, which at no point enters into a close reading of a film. In fact, the number of films even just passingly mentioned in the book is probably well under twenty. As a result, the discussion stays very much above any individual film throughout the entire 323 page book. Yet, this never constitutes a problem, as Gerow has much interesting to say.

Visions of Japanese Modernity is primarily concerned with the Pure Film Movement, which in the early years of Japanese cinema aimed to give it an identity that would be unified in essence and not derivative of other art forms, especially theatre. Gerow traces the development of Pure Film Movement through three major and often antithetical forces: film critics, film censorship and benshi, or silent film narrators. He shows that each of these, together with many other smaller forces, had a large part to play in the development of Japanese film identity and the art form’s growth by the mid-1920s into something that could be considered to possess a set of its own unique qualities and challenges.

Gerow’s introduction (39 pages) provides the basis on which he lays the rest of his book, and initiates a dialogue with earlier studies that he maintains throughout the work. Chapter 1 (“The Motion Pictures as a Problem”, 26 pages) begins the main part of the work by illustrating how difficult it is to define any meaningful starting point for Japanese cinema, largely because of an initial lack of a unique voice or methodology, and shows how the art form began to acquire a fully separate identity only after the first major Japanse censorship case, that of the French 1911 film Zigomar. Chapter 2 (“Gonda Yasunosuke and the Promise of Film Study”, 28 pages) traces early efforts to find that missing unique voice and methodology, with Gerow specifically concentrating on the writings of early film scholar Yasunosuke Gonda, who among other things published the first full-length Japanese study of cinema in 1914. In chapter 3 (“Studying Pure Film”, 39 pages), the Pure Film Movement is introduced, with Gerow pointing out the movement’s conscious efforts to suppress certain types of films in favour of a specific class-based and authoritative vision of modernity and cinema. Chapter 4 (“The Subject of the Text: Benshi, Authors, and Industry”, 41 pages) moves on to discuss the central place that benshi had in contemporary Japanese cinema, and how they together with the increasing commercialisation of the Japanese film industry influenced the development of the art form, despite (and partly because of) the criticism that the Pure Film Movement launched against them. Finally, in chapter 5 (“Managing the Internal”, 48 pages) Gerow discusses early Japanese film censorship and how it contributed to give cinema a unique identity in the eyes of both policymakers and audiences following the Zigomar case discussed in chapter 1. This is followed by a 13-page conclusion, which summarises the discussion and provides final comments.

Gerow’s book is very thoroughly researched, which is evident also in the fact that it contains a 54-page notes section and a 14-page selected bibliography. In fact, at times the book feels almost too well researched, with the number of examples given by the author to support his discussion briefly crossing the border between exhaustive and exhausting. This, however, makes the book only more valuable as a research volume for later use, and thankfully for that purpose the book is also equipped with a very thorough 21-page index. As regular readers of my reviews may have noticed, I highly value a book that comes with a good index.

Considering that Visions of Japanese Modernity covers an era of Japanese cinema that for the most part took place more than two decades before Akira Kurosawa’s debut as a director, one might assume that it has very little to do with Kurosawa. But this is far from being true. The identity formed for Japanese cinema by the critics, censors and other developmental forces of the 1910s and early 1920s is to a large extent the identity that directors like Kenji Mizoguchi and Yasujiro Ozu inherited and within which they worked, passing the torch in turn to directors of Kurosawa’s generation. Secondly, the figure of the benshi was certainly central to Kurosawa’s own personal experience of early Japanese cinema, as his brother worked as one at the time. Finally, one may even pose the question how much Kurosawa’s own ideal of “cinematic beauty” was directly or indirectly influenced by the efforts of the Pure Film Movement to define through cinema a uniquely visual narrative art form.

While I have admittedly little with which to compare Visions of Japanese Modernity, I feel that I emerged from the reading experience with a fairly good understanding of early Japanese cinema, and a desire to know more. Even more importantly, the book has a wealth of information and is easy to go back into, whether for research purposes or simply in order to dip into any of the individual subjects that it discusses. I can therefore warmly recommend Gerow’s book to anyone who is interested in the development of Japanese cinema, in film theory, or simply desires to have a more solid historical background within which to appreciate Kurosawa’s works.

Visions of Japanese Modernity was published in May, and is available in paperback, hardback and ebook formats. Try for instance Amazon.com, Amazon.ca, Amazon.co.uk, Amazon.fr, Amazon.de, and Amazon.co.jp or The Book Depository.