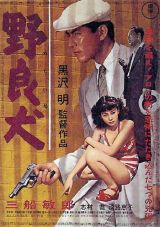 It is the first of August, which in Film Club terms means the beginning for the discussion of Kurosawa’s 1949 movie Stray Dog (“Nora inu”).

While Stray Dog is considered one of Kurosawa’s early masterpieces, unlike later masterpieces such as last month’s Yojimbo, there haven’t been many remakes or reinterpretations of the movie. The only one that I am aware of is a Japanese remake from 1973, also called Nora inu, which seems to be unavailable.

As for other related works, while the story of Stray Dog was a Kurosawa original (actually based on an unpublished novel that he wrote), he has remarked that in writing the story he had the crime fiction of Georges Simenon in mind. Stylistically, the film has meanwhile been argued to take some of its cues from the American film noir genre.

On a completely personal note, and as seems to have become the tradition for the first days of any new film with the film club, I will be travelling this weekend, and won’t have Internet connection at all. I will, however, post a quick discussion opener before I leave, and will return next week with a vengeance.

Finally, there is some really good discussion still going on regarding Yojimbo, and I would be sad to see that stop simply because we now move onto a new movie. If you have the time to contribute to both editions of the film club, don’t hold back!