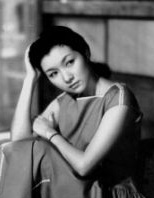 The Japanese actress Akemi Negishi died of cancer in Kawasaki on March 11 at the age of 73.

Negishi first came into international prominence through Josef von Strinberg’s 1953 Anathan, which was a co-production between Japan and Hollywood. She became known for her sensuous, even seductive acting, which was somewhat unusual for the 1950s and 60s Japan. Her credits with Kurosawa include four movies: Record of a Living Being, The Lower Depths, Dodesukaden and Red Beard.

Negishi was also known for her television and theatre work.

This photo is NOT of the actress listed but of Hideko Takamine, another Japanese actress.

Indeed, you are probably right doggie. Thanks for pointing that out! I’ll need to be more careful where I nick my pictures from.

This seems to be the real deal.

That’s a sexy beautiful young lady. She might be gone from this world but spiritually She lives any way.

She was pretty hot in The Lower Depths. I like that part near the end where she does that mocking little dance thing. She was yummy as the town sex pot in Dodes’ka-den as well. Very cute lady and a good actress.

The first time I saw Her was in Kong Vs Godzilla and my jaws dropped to the floor and of course I closed them.

I got a little confused seeing this, I thought it was a new thread!

Reading up a little on her, she seems to have had a very interesting career and seems to have been fortunate to find directors who realised that she was more than just a beauty.

A distinctive thing about some Japanese actresses of the period is that they seem to have entirely fallen off the radar of the public as soon as they decided to retire, even at a young age (Misa Uehara of Hidden Fortress as an example). There seems to be no information whatever about her following Dodesukaden.

First, I saw her face it was like I saw her before and when I search it on google I remember she was from the movie half human. Although she was a great actress and a film star, she died because of cancer as a star, they can get any major treatment from anywhere, but everyone has an expiration date.