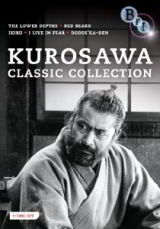 As far as I’m aware, this is the first time that The Lower Depths and Dodesukaden are available on region 2 DVDs with English subtitles, so it is great news to see BFI put out these sets.

For more information about Kurosawa’s films on DVD, see the Kurosawa DVD guide.