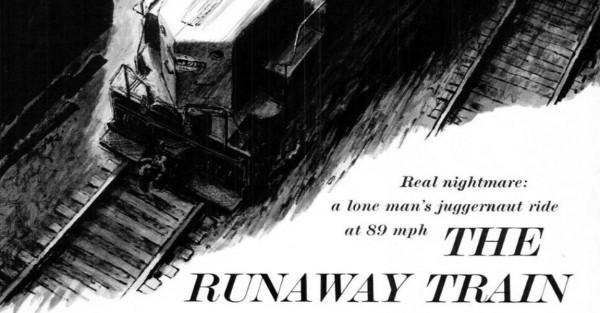 Kurosawa’s first Hollywood project, titled Runaway train, was inspired by an article in the Life Magazine that was originally published in March 1963

Following the release of Red Beard (1965), it looked like the 1960s would be Kurosawa’s decade. The previous five years had been very kind to the director, who had put out one film classic after another and broken box office records and collected awards in the process. It had been an unquestionable high point in Kurosawa’s career.

But the Japanese film industry was struggling. By the mid-1960s, television had overtaken cinema as the primary entertainment medium and film productions had become smaller with studios less eager to take risks. Kurosawa, whose exclusive contract with Toho came to an end in 1966, was contemplating his place in this picture. Considering the state of the domestic film industry, and having already received dozens of offers from abroad, the idea of working outside of Japan seemed appealing.

In early 1964, while working on Red Beard, Kurosawa had come across a magazine article about an incident with a runaway locomotive in the United States. The article, which Kurosawa encountered in Japanese in Bungei Shunju had originally appeared in the March 29, 1963 edition of the Life magazine under the title “The Runaway Train”. By coincidence, the editor-in-chief at Life magazine’s publisher Time Inc was an admirer of Kurosawa’s work and, visiting Japan in 1965, offered his help to Kurosawa. Soon Kurosawa had not only the rights to the story and additional information at his disposal, but he was also talking about the film with an American producer, Joseph E. Levine. Things moved with some speed and by the summer of 1966 Kurosawa, Hideo Oguni and Ryūzō Kikushima had come up with a screenplay that had been translated into English, and on June 29, 1966 Kurosawa and Levine announced the production of Runaway Train to the media in New York.

The film was to be shot in the US between October 1966 and February 1967 for a late 1967 release. It would be Kurosawa’s first film shot in colour, although the director was still planning the colour palette to be predominantly dominated by black (train engines) and a white (snow covered landscape). The screenplay would be finalised by Sidney Carroll, an American screenwriter best known for The Hustler. Carroll’s task was to convert the dialogue into American vernacular and the structure into American production standards.

With a $5.5 million budget, which was comparable for instance to the budget of The Planet of the Apes (1968), Runaway Train would not be a small project. Levine, however, was thinking even bigger, having talked with Kurosawa about collaboration on four further films after the release of Runaway Train. Things looked good, but problems began to soon emerge, primarily due to cultural differences.

Carroll, trying to shape the script into something that an American production crew would be familiar with and could make us of, tried to get Kurosawa to commit to details which Kurosawa, more accustomed to making final decisions on the day of the shoot, was not ready to decide. The matter dragged on, the shooting schedule was delayed, and in November 1966, only a month before the shoot was finally supposed to start, Kurosawa, physically exhausted by the process, requested that the entire production be delayed for a year. This, he thought, would give everyone enough time to prepare and get over the language and cultural barriers. Levine, despite having already contracted most of the 130 member crew, begrudgingly decided to accept Kurosawa’s decision and cancelled the shoot, rather than going with another director.

In spring 1967, there was still hope for Kurosawa’s Runaway Train, but the director’s plans were changing. By that point, Kurosawa had been contacted by 20th Century Fox film studios about the idea of him working on the war film Tora! Tora! Tora!, and it began to take precedence over Kurosawa’s plans for the locomotive action film. Tora! Tora! Tora!, produced by 20th Century Fox and Kurosawa Production, would be a retelling of the Japanese attack on Pearl Harbor as told from an American and a Japanese point of view, with Kurosawa helming the Japanese part and an American director taking over the other half. The deal was officially announced in April 1967. 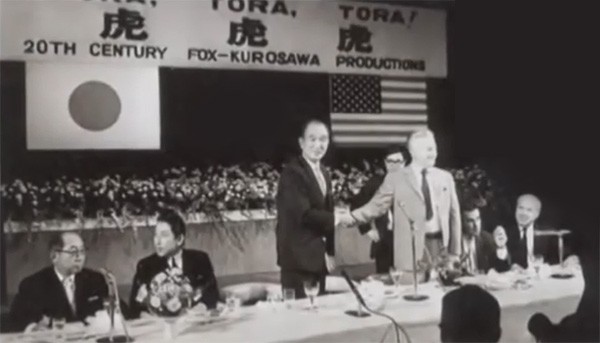 April 1967, Kurosawa and Fox executive Elmo Williams shake hands at the announcement of the American-Japanese co-production of Tora! Tora! Tora!

However, the problems encountered with Runaway Train returned. Much of 1967 was consequently spent on something of a tug of war about the Tora! Tora! Tora! script between Kurosawa and Fox’s representatives. Fox was aiming for a historically accurate cinematic spectacle, while Kurosawa was set on making an epic tragedy. It didn’t help that the script Kurosawa’s writing team had come up with was longer than the intended full film, which should also include the American half. Kurosawa was further infuriated by the fact that the American sequences would not be directed by David Lean as originally suggested, but the special effects specialist Richard Fleischer whom Kurosawa didn’t consider an equal.

After most of the major issues were more or less resolved by January 1968, Japanese preproduction was ready to begin. If the American producers thought that it would be smooth sailing from here on, they were wrong, for Kurosawa next shocked them by deciding to pick total amateurs for the film’s leading roles. Rather than looking for an impressive acting pedigree in casting, Kurosawa concentrated heavily on character type. By selecting Japanese businessmen who had in real life served in the war, Kurosawa believed that he could bring an air of authority onto the screen in a way that would not be possible with experienced actors. This, together with Kurosawa’s climbing budget needs, including a full-scale replica of battleship Nagato, continued to keep the American producers worried about the production’s Japanese half.

As the shoot, planned to start in December 1968, drew closer, Kurosawa felt increasingly under pressure and his health began to deteriorate. He also became increasingly paranoid as the production began to receive death threats due to its delicate subject matter. The situation was further complicated by the fact that Kurosawa would not be working with his regular crew, but with one based in Kyoto. From the beginning of the shoot the director and his crew, unaccustomed to Kurosawa’s working style, didn’t seem to be getting along. 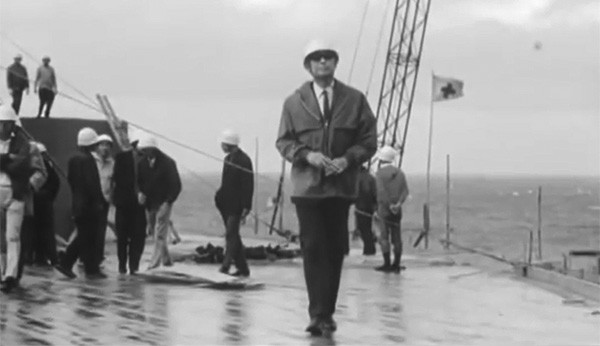 Pensive Kurosawa on board his full-scale replica of battleship Nagato during the production of Tora! Tora! Tora!

In the end, Kurosawa lasted for only 23 days. His working methods puzzled his American producers, and as the shoot was immediately badly behind schedule under his erratic behaviour, the Americans concluded that the director must be nothing less than mentally ill. On the 24th of December 1968, Fox announced that Kurosawa had left the production due to fatigue, effectively firing him.

The situation was difficult and it led to two rather notable personal fallings-out to take place. One was between Kurosawa and his long time co-scriptwriter and Kurosawa Production executive, Ryūzō Kikushima, who would stay with the Tora! Tora! Tora! production and with whom Kurosawa would never work again. The other was with Toshirō Mifune, who had heavily criticised Kurosawa for his decision to cast non-actors. Mifune would likewise never work with Kurosawa again. Whether things said in the aftermath of Tora! Tora! Tora! were the sole reason for these broken friendships is difficult to say, but they probably did have an impact.

Also a legal battle about ownership and financial responsibilities followed, dragging all the way until early 1971. In the process, facts began to emerge that some of the core reasons for production difficulties with not only Tora! Tora! Tora! but also Runaway Train most probably lay with people working at Kurosawa’s own production company who had failed to keep either Kurosawa or his American producers in the loop about everything that they needed to know to guarantee a successful production. As a result, three prominent figures from Kurosawa Production resigned, and the company would not take part in another film production for over ten years.

This was not much of a consolation for Kurosawa, whose Hollywood career had ended before it had really even begun. With his two misadventures, the director had acquired a reputation that made it practically impossible for him to find other international projects. This would be the beginning of a difficult period in Kurosawa’s life and career.