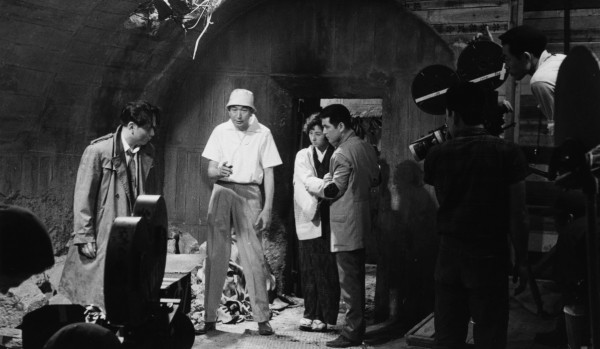 Following Rashomon, the scope of Kurosawa’s productions had steadily increased and so had the director’s budgets, sometimes going multiple times over their pre-production estimates. Toho, concerned about this development, suggested that the director could help to finance his own works, therefore making Toho’s potential losses smaller, while in turn allowing Kurosawa more artistic freedom as a co-producer. Kurosawa agreed to the idea, and his new production company Kurosawa Production Co was founded in April 1959, with Toho as its majority shareholder.

Despite now directly risking his own money, Kurosawa was not interested in creating a work solely aimed at securing box office success for with debut film for his new production company. On the contrary, he decided to take advantage of his increased creative freedoms and chose a story more directly critical of the Japanese business and political elite than had been the case with his recent works. The film, The Bad Sleep Well (Warui yatsu hodo yoku nemuru), was based on a script by Kurosawa’s nephew Mike Inoue and is a revenge drama about a young man who climbs up in the hierarchy of a corrupt Japanese company with the aim of exposing the men responsible for his father’s death. Its theme proved very topical, as while the film was in production, mass demonstrations were held against a new US-Japanese treaty, which was seen by many to threaten the country’s young democracy by giving too much power to the hands of corporations and individual politicians.

Filming The Bad Sleep Well began on 28 March 1960, five days after Kurosawa turned 50. The shoot lasted for four months, with the first test screenings held on August 22. The completed film opened on 4 September 1960 to a positive critical reaction, and it proved a modest box office success. Today, The Bad Sleep Well is generally considered something of a flawed masterpiece, with its first 25-minute act seen as one of the most skilfully executed sequences that Kurosawa ever filmed, but with the rest of the film largely failing to live up to its promise.

After completing The Bad Sleep Well, Kurosawa embarked on his second trip to Europe, this time visiting the 1960 Summer Olympics in Rome, as well as several film festivals. The director had been offered the role of directing a documentary of the upcoming 1964 Summer Olympics in Tokyo and intrigued by the idea Kurosawa wanted to familiarise himself with the event in Rome. Kurosawa’s involvement with the production would last two and a half years, but the director would ultimately come to a disagreement with the film’s producers over the proposed budget. In the end, the project was given to Kon Ichikawa, whose Tokyo Olympiad is now considered one of the finest documentary films of all time.

Meanwhile in the USA, Seven Samurai was being remade as a western under the title The Magnificent Seven, which had also been the original American title for Seven Samurai. Kurosawa, too, decided to turn his attention to westerns, but strongly with the samurai film genre also in mind. Yojimbo, Kurosawa Production’s second film, centres on a masterless super samurai portrayed by Toshirō Mifune who strolls into a town ruled by two opposing gangster groups and proceeds to destroy them. In the film, Kurosawa plays with many genre conventions, while simultaneously offering a more realistic and graphically explicit portrayal of violence than most films had dared to do. Shooting began on January 14, 1961 and wrapped on April 16, only four days before the film’s premiere. The film was an immense success at the box office, earning more in the box office than any Kurosawa film had before. Critical reaction was equally positive and Yojimbo proved a major influence on its genre, immediately ushering in a new era of ultra-violent samurai films, disappointing Kurosawa who felt that this was very much the opposite of what his intentions with the film had been. 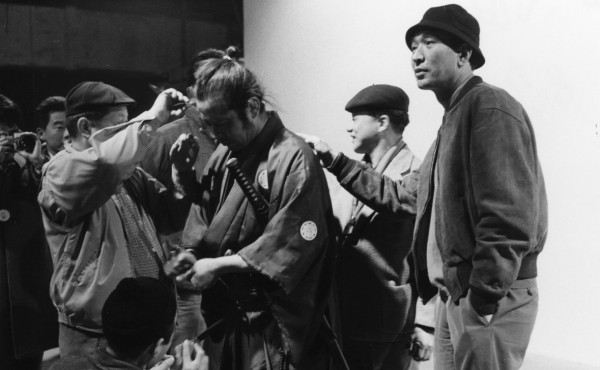 Kurosawa preparing Toshirō Mifune for a scene on the set of Yojimbo (1961). Mifune’s portrayal of the nameless wandering hero is one of the most iconic in the history of cinema.

Following the success of Yojimbo, Kurosawa found himself under pressure from Toho to create a quick sequel to the work. Never before interested in revisiting his characters or stories, Kurosawa now turned to a script that he had written before Yojimbo and reworked it to include the hero of his previous film. Sanjuro (Tsubaki Sanjuro), originally based on a Shūgorō Yamamoto novel and now sharing the same or at least a very similar protagonist as Yojimbo, is actualy a film fairly different from its predecessor. Lighter in tone, it is less influenced by the samurai and western genres and closer to a conventional period film, with its story of a power struggle within a samurai clan portrayed with strongly comic undertones. Filming began on September 25, five months after the production of Yojimbo had wrapped, and lasted until December 20, making it a relatively quick shoot by Kurosawa’s standards. Once again, a mere one week post-production period followed, and the film opened on January 1st, 1962, quickly surpassing even Yojimbo‘s box office success and garnering similarly positive reviews from film critics. Today, both films are considered among Kurosawa’s finest.

As he was now co-producing his films, box office success directly correlated with Kurosawa’s own financial situation, and in April 1962 the Kurosawas moved to a new 3,600 square foot residence in the Setagaya district of Tokyo. The children were also growing: Hisao, now 16, was already majoring in economics and enjoying moderate success as a folk musician, while the eight-year-old Kazuko was attending elementary school.

Meanwhile, Kurosawa himself could not stop working. While filming Sanjuro, he had already started preparations for his next film, instructing Toho to purchase film rights to King’s Ransom, a hard-boiled crime novel about a kidnapping written by American author Ed McBain. Once the production of Sanjuro wrapped, Kurosawa immediately shifted his attention to the story, and after writing the screenplay together with his regular co-authors Ryūzō Kikushima, Hideo Ogumi and Eijirō Hisaita, preproduction of High and Low (Tengoku to Jigoku) began on July 20, 1962. The summer was spent in casting and rehearsals with filming beginning on September 2 and lasting for five months, finally wrapping on January 20, 1963. The film, released on March 1, 1963, broke Kurosawa’s personal box office record for the third film in a row and became the highest grossing Japanese film of the year. It also attracted glowing reviews, further solidifying Kurosawa’s critical and commercial standing as Japan’s leading film director. The film won the Best Film and Best Screenplay categories at the Mainichi Film Awards and while somewhat less well known today than Kurosawa’s other major films, it is nevertheless considered among his very best.

Enjoying his success and creative freedom, Kurosawa again quickly moved onto his next project, Red Beard, which he envisioned as his largest and most demanding production yet. Based on a short story collection by Shūgorō Yamamoto and incorporating elements from a Fyodor Dostoyevsky novel, it is a fairly sentimental period film with strong humanist themes set in an early nineteenth-century rural clinic. The script was finished in July 1963 and a five-month pre-production period began, with filming finally commencing on December 21. The shoot, Kurosawa’s longest so far, lasted for over a year and wrapped in spring 1965, leaving the director, his crew and actors exhausted but proud of what they had achieved. 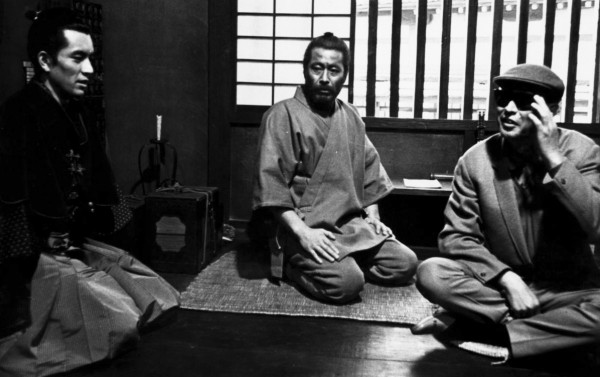 So long was the film’s production period that before Red Beard went on wide release, altogether four other films had been put into production that bore Kurosawa’s signature. Kinji Fukasaku’s Jakoman and Tetsu (Jakoman to Tetsu) was filmed from Kurosawa’s screenplay, while Kurosawa himself produced Sanshiro Sugata, a remake of his first film and its sequel, filmed and released partly to cover the costs of making Red Beard. Meanwhile, the American film The Outrage and the Italian A Fistful of Dollars premiered overseas, with the former a western based on Rashomon and the latter a spaghetti western by an upcoming talent Sergio Leone based on Yojimbo. As the Italians had made their film without permission, a lawsuit was launched against the producers and the film’s director. The case was ultimately settled out of court, with Kurosawa and Toho reportedly receiving a portion of the Italian film’s worldwide box office.

Red Beard premiered on April 3, 1965 and once again provided Kurosawa Production and Toho with a commercial hit, as the film become the year’s highest grossing Japanese film. Just like the audience, Japanese critics responded extremely well to the work, and it remains one of Kurosawa’s best known and most loved in the country. Internationally, critics have been more divided, with most commentators praising its technical merits as perhaps Kurosawa’s technically most complete work, while others insisting that it lacks true complexity and genuine narrative power.

What most film critics agree on is that Red Beard marks something of an end of an era for Kurosawa. The director himself recognised this at the time of the film’s release, telling film critic Donald Richie that a cycle of some kind had now come to an end, and that his next films and production methods would be different. Although unknown to Kurosawa at the time, his prediction proved very accurate. Large changes would indeed be taking place, and the director would never enjoy the same kind of almost unrestricted financial freedom and critical and commercial success that he had for the past fifteen years.

As an example of this, Red Beard approximately marks the midway point in the director’s career, and he had by now directed altogether twenty-three films in twenty-two years. In contrast, during the remaining twenty-eight years of his career, Kurosawa would have the chance to make only seven films. For reasons never fully explained by any of the involved parties, Red Beard would also be Kurosawa’s last work with actor Toshirō Mifune, the director’s leading man for most of his career, ending one of the most famous director-actor relationships in the history of cinema.