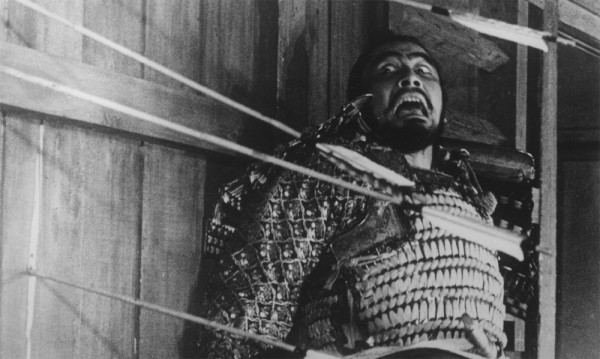 Kurosawa’s daughter Kazuko’s birth in 1954 coincided with somewhat uncertain times in Japan. United States and the Soviet Union, the two Cold War superpowers, had recently been involved in a war in Japan’s neighbouring Korea, while nuclear bomb tests had intensified in the Pacific Ocean after the invention of the hydrogen bomb, a weapon hundreds of times more powerful than what had been dropped on Hiroshima and Nagasaki at the end of the Second World War. These tests caused radioactive rainstorms in Japan and one particular incident in March 1954 had exposed a Japanese fishing boat to nuclear fallout with disastrous results.

It is in this atmosphere that Kurosawa’s next film, Record of a Living Being (Ikimono no kiroku), was conceived. It portrays an elderly factory owner terrified about the prospect of a nuclear attack and determined to move his family to safety in Brazil. Production of the film began in May 19, 1955, with extensive preparation and rehearsals taking place before a relatively fast six-week shoot in August and September. The shoot was much less demanding than the director’s previous one, but it wasn’t without its hardships: a few days before the filming ended, Kurosawa’s composer and collaborator Fumio Hayasaka passed away of tuberculosis at the age of 41. The film’s score was finished by Hayasaka’s student Masaru Satō, who would also go on to score Kurosawa next eight films.

Record of a Living Being opened on 22 November 1955 to mixed reviews and a muted audience reaction, becoming the first Kurosawa film to actually lose money during its original theatrical run. Unlike his last two features which had been given international releases soon after domestic release, Record of a Living Being would not be released abroad until years later, apart from a screening at the 1966 Cannes Film Festival. Today, it is nevertheless considered by many to be among the finest Japanese films dealing with the psychological effects of a global nuclear threat, and one of Kurosawa’s best works.

The commercial failure of Record of a Living Being did not prove to be a major hindrance for Kurosawa, and the director began working on his next film the following spring. The project, an adaptation of William Shakespeare’s Macbeth, was something that Kurosawa had been originally wanted to make already a decade years earlier, but with Orson Welles’s 1948 film adaptation of the same play, he had decided to put it on hold. Throne of Blood (Kumonosu jo), as the film would be called, began shooting on June 29, 1956, and the production lasted until the end of the year. Postproduction followed, and the film was released on January 15, 1957 to a slightly less negative domestic response than had been the case with Kurosawa’s previous film. Abroad, Throne of Blood would, despite the liberties that it takes with its source material, quickly earn a place among the most celebrated Shakespeare adaptations. It is today considered one of Kurosawa’s finest films.

Another adaptation of a western play followed almost immediately, with production of The Lower Depths (Donzoko), based on the Maxim Gorky play of the same name, beginning in May 1957. Just like he had earlier done with Shakespeare and Dostoyevsky, the screenplay transported the story into Japan. After extensive preparations, only four weeks were spent shooting the film, with the filming commencing on June 24. The Lower Depths premiered in September and went to a general domestic release on October 1, receiving a somewhat mixed response similar to that of Throne of Blood.

After the Japanese premiere of The Lower Depths in 1957, Kurosawa embarked on his first trip to a western country, staying for two weeks in London where he attended the British premiere of Throne of Blood, which was screened as part of the London Film Festival. While in London, Kurosawa also met the American director John Ford, whom Kurosawa considered one of his favourites and biggest personal cinematic influences. Kurosawa’s biographer Stuart Galbraith IV notes that so influential was his meeting with Ford in 1957 that after returning from Europe, Kurosawa would adopt his American colleague’s style of personal wardrobe and from then on wear sunglasses and a wool cap on the set, a look that would become something of a trademark during the Kurosawa’s later career. 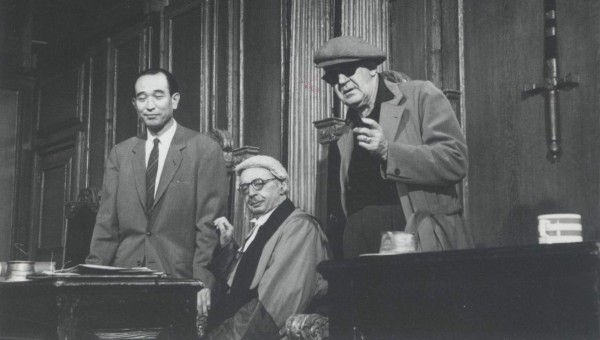 Kurosawa, Miles Malleson and John Ford on the set of Gideon’s Day (1958)

Kurosawa’s three films following Seven Samurai had not managed to capture Japanese audiences in the way that the samurai film had, and box office figures were down. Themes in the director’s films had been growing increasingly dark and pessimistic, with the possibility of individual redemption through personal responsibility that works such as The Quiet Duel and Stray Dog had promoted ten years earlier now very much questioned in recent works such as Throne of Blood and The Lower Depths. Kurosawa decided to aim for a more light-hearted and entertaining film for his next production, while also contemplating a switch to the new widescreen film format that had been gaining popularity also in Japan.

The resulting film, The Hidden Fortress (Kakushi toride no san akunin), is a period film action-adventure that follows a princess, her general, and two peasants who need to travel through enemy lines in order to reach their homes. The film, Kurosawa’s first in widescreen, borrows somewhat from his early work The Men Who Tread on the Tiger’s Tail as well as from his 1942 script for Three Hundred Miles Through Enemy Lines, which had finally been filmed by Kazuo Mori for a December 1957 release. Kurosawa began the production of The Hidden Fortress in spring 1958 with shooting commencing on the 27th of May and lasting until December 11. Another hurried post-production typical for Kurosawa followed, and the film was released on December 28.

Just like Kurosawa had hoped, The Hidden Fortress proved an enormous box office success in Japan and was also warmly received by critics. It won for best Screenplay at the Kinema Junpo Awards, Best Film at the Blue Ribbon Awards, and two awards at the Berlin Film Festival. Today, the film is considered Kurosawa’s lightest and among his less artistically important efforts, although it remains very popular, not least because of its influence on George Lucas who would use The Hidden Fortress as basis for his 1977 space opera Star Wars.