The Life of Akira Kurosawa – Part 5: Daughter and international breakthrough (1950–1955) 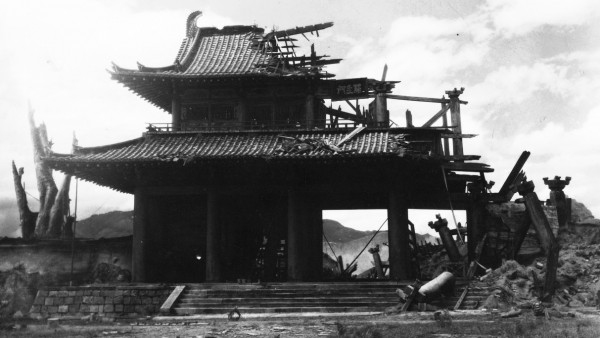 After finishing Scandal (1950), Kurosawa was approached by Daiei studios who inquired if the director would be interested in making another film for them following the success that their previous collaboration The Quiet Duel had enjoyed a year earlier. While considering possible stories to work on, Kurosawa picked up a screenplay by the young screenwriter Shinobu Hashimoto. It was based on author Ryūnosuke Akutagawa’s (1892–1927) experimental short story “In a Grove” which recounts the murder of a samurai and the rape of his wife, narrating the story from various different and conflicting points of view and in doing so questioning the human ability to perceive and recount objective truths. Kurosawa saw potential in the script, and with the help of Hashimoto polished and expanded the screenplay and then pitched it to Daiei, who happily picked the film as it came with a fairly low budget estimate.

Rashomon was the first of Kurosawa’s nine films co-written with Hashimoto, and it was also the first film in which the director worked with the script supervisor, continuity assistant and later overall principal assistant Teruyo Nogami. Kurosawa’s professional relationship with Nogami continued for the rest of the director’s career and she became something of a right hand woman for him.

Shooting Rashomon began on July 7 and wrapped a month later on August 17, 1950, with the film ending up going well over the originally estimated budget, primarily because of the construction of the enormous Rashomon gate which Kurosawa requested for the film. Just one week was spent in hurried post-production, and the finished film premiered at Tokyo’s Imperial Theatre on August 25, expanding nationwide the day after. The film was met with somewhat average reviews as many critics were puzzled by its content, but it was nevertheless a moderate financial success for the studio and the film ended up winning Best Screenplay at the then prestigious Blue Ribbon Awards in March 1951.

Soon after the release of Rashomon, Kurosawa was already working on his next film, and one on a far grander scale. The Idiot was an adaptation of Fyodor Dostoyevsky novel of the same name and the director approached the work with dedication even surpassing anything that he had given to his previous films. Produced by Shochiku and released on May 23, 1951, it relocates the story from Russia to Hokkaido but is otherwise fairly faithful to the original, which Kurosawa revered. The film’s close dependence on its source material has been seen by many as detrimental to the work, and combined with a studio-mandated cut which shortened it from its original 265 minutes down to 166 minutes, the resulting film is typically considered one of the director’s least successful works, although the film certainly does have its merits. It is unfortunate that Kurosawa’s original cut no longer exists, making it impossible to assess the film as it was intended by its director. Japanese reviews of The Idiot were negative at the time of its release, although the film nevertheless managed a moderate success at the box office, largely thanks to the popularity of actress Setsuko Hara, with whom Kurosawa had worked previously on No Regrets For Our Youth.

Kurosawa was next scheduled to make a film for Daiei, but following the poor reception of The Idiot, the company withdrew their commitment and after a string of five films that he had directed in the span of just three years, Kurosawa suddenly found himself without a project. Having shown promise with Drunken Angel and Stray Dog, it now looked like the poor performance of his latest works might even force the now 41-year-old filmmaker to take an extended break from directing. Fortunately for him and his family, even if his directorial eye was suddenly not requested, his skills as a screenwriter would still bring in the money. For films released in 1951 and early 1952, Kurosawa provided scripts to Senkichi Taniguchi’s Beyond Love and Hate, Tatsuyasu Osone’s The Den of Beasts, Kazuo Mori’s Vendetta for a Samurai and Hiroshi Inagaki’s Sword for Hire.

Unbeknownst to Kurosawa, Rashomon had meanwhile been entered to competition at the prestigious Venice Film Festival, largely thanks to the insistence of Giuliana Stramigioli, a representative of an Italian film company who had convinced Daiei to submit the work. To the great surprise of everyone except perhaps Stramigioli, Rashomon ended up charming the competition jury and on 10 September 1951, a little over year after its domestic release, it was awarded the festival’s highest prize, the Golden Lion. Rashomon was the first Japanese film to win the award and its success introduced Japanese cinema to the international film audiences, the country’s cinematic achievements having been internationally largely unknown until then. The film went on to win also numerous other international awards in Europe and North America, including an honorary Academy Award as the best foreign language film of the year.

As the news of Rashomon‘s success in Venice reached Japan a few days later, Kurosawa was suddenly in demand again. Boosted by his sudden international recognition, the director set out to work on his next film, Ikiru, which reunited him with film studio Toho, a partnership which would last for Kurosawa’s next eleven films. 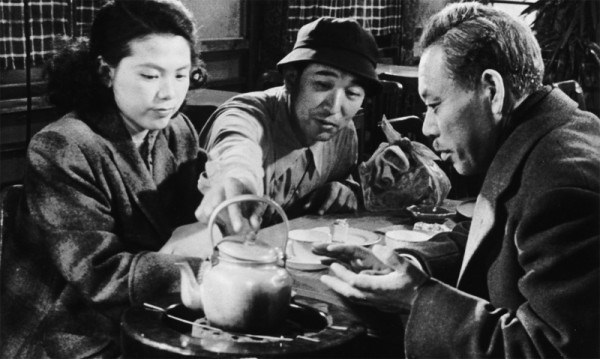 Ikiru stars Takashi Shimura as a cancer-ridden Tokyo bureaucrat on his final quest for meaning before his death. For the screenplay, Kurosawa brought in Shinobu Hashimoto, as well as the experienced screenwriter Hideo Oguni who already for over a decade had helped Kurosawa with his writing, but never in official capacity. Following Ikiru, Kurosawa and Oguni would go on to co-write altogether eleven other of the director’s films.

Pre-production on Ikiru commenced in January 1952 and filming lasted from March until September, with the film opening on October 9 to rave reviews and big box office success. The film won the Kinema Junpo Award for Best Film, as well as Mainichi Film Awards for Best Film, Best Screenplay and Best Sound Recording, while internationally it won a special prize at the Berlin Film Festival and earned Takashi Shimura a BAFTA nomination. The film remains one of Kurosawa’s most discussed and internationally best known, together with the director’s next work, Seven Samurai (Shichinin no samurai).

Less than a month after the release of Ikiru, Kurosawa’s mother Shima died at the age of 82. Changes happened also in Kurosawa’s own household, as he, Yōko and Hisao moved into a new seven-bedroom home in the Komae area of Tokyo, reflecting the increased financial security brought to him by the recent successes of Rashomon and Ikiru.

Kurosawa kept working. In January 1953, Senkichi Taniguchi’s My Wonderful Yellow Car opened in theatres with a script written by Kurosawa and Taniguchi. But Kurosawa himself had no time to attend the premiere, as he had already taken his Ikiru screenwriters Shinobu Hashimoto and Hideo Oguni for a forty five day secluded residence at an inn in order to create the screenplay for his next film Seven Samurai. The ensemble film was Kurosawa’s first proper samurai work, and centres on a small farming village and a group of samurai who are hired to protect the villagers from an impending bandit attack. The production turned out to be a massive undertaking, with three months spent in pre-production, a month of rehearsals, and a total of 148 shooting days spread over almost a year of filming that was interrupted by production and financing difficulties, as well as health problems for Kurosawa, who was suffering from exhaustion and an infection. 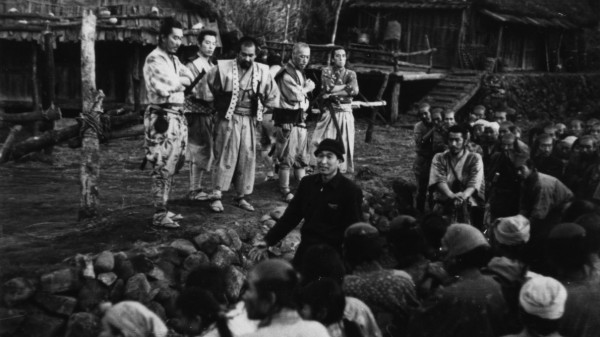 On the set of Seven Samurai (1954), Kurosawa prepares the samurai and the villagers for the crucial scene where the two groups first come in contact with each other

Seven Samurai finally opened on April 26, 1954, half a year behind its originally planned release date and some three times over budget, making it at the time the most expensive Japanese film ever made. Fortunately for Toho and the director, the film also garnered a positive critical reaction and turned out to be a big commercial success, quickly making back the money invested in it, and providing the studio with a product that they could, and would, market internationally for decades to come. Despite its popularity, the film failed to win any major awards, although it did earn Kurosawa a Silver Lion at the Venice Film Festival and was nominated for several other awards around the world.

On April 29, three days after the premiere of Seven Samurai and nine years after their firstborn, Yōko gave birth to the couple’s second and last child, a girl they named Kazuko. Exhausted by the making of Seven Samurai and overjoyed about his new daughter, Kurosawa spent more than a year with his family before taking on a new project, although he did keep writing and two films featuring his screenplays were released in 1955: Akira Mimura’s Vanished Enlisted Man (Kieta chutai) and Hiromichi Horikawa’s Tomorrow I’ll be a Fire-Tree (Asunaro monogatari).