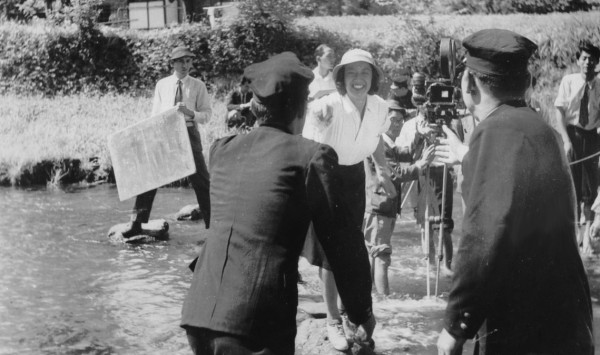 After the failed release of The Men Who Tread on the Tiger’s Tail and Japan’s surrender to the Americans, Kurosawa had spent much of the rest of the year at home, working on a theatre play titled Talking (Shaberu) which reflected some of the changes taking place in post-war Japan. He also had another good reason to stay at home, as the end of Yōko’s pregnancy was nearing. On December 20, 1945, she gave birth to a son whom the new parents named Hisao.

Kurosawa was briefly called back to the director’s chair in early 1946. Toho was suffering from labour strikes and the studio requested Kurosawa’s participation in the filming of the pro-unionist Those Who Make Tomorrow (Asu o tsukuru hitobito). Directorial duties on the film were shared between Kurosawa, Kajirō Yamamoto and Hideo Sekigawa, and Kurosawa himself had very little interest in making the film which reportedly took only a week to shoot. He would never consider it a part of his oeuvre.

For his first proper post-war film, Kurosawa turned to the subject of the war itself. No Regrets for Our Youth (Waga seishun ni kuinashi) was prepared for a summer production and was released on October 29, 1946. The film was based on the 1933 Takigawa incident, when the Japanese government accused and effectively fired professor Yukitoki Takigawa of Kyoto Imperial University’s Faculty of Law for spreading Marxist ideology, resulting in a string of faculty resignations and student protests. Kurosawa’s film was a fictionalised account of a similar incident, and very critical of Japan’s pre-war regime. It starred the 26-year-old upcoming star Setsuko Hara, who is best remembered for her work with Yasujiro Ozu.

In many ways No Regrets for Our Youth is Kurosawa’s first film with a distinct directorial voice. His aim with the film and those that immediately followed it was to argue that the only sensible direction for Japan after the war was to establish a new respect towards the individual and the self. The original script had to be rewritten due to censorship and because of its controversial nature the completed work divided critics. Yet, the film managed to win the approval of the audiences who turned the film’s title into something of a post-war catchphrase. No Regrets for Our Youth was also the first of his own films where Kurosawa shared the writing credit, beginning a habit of collaborative writing that he would stick to for the next forty years.

Following No Regrets For Our Youth, Kurosawa began work on two love stories. He first contributed to the script of the ensemble film Four Love Stories (Yotsu no koi no monogatari), directed by Shirō Toyoda, Mikio Naruse, Kenta Yamazaki and Teinosuke Kinugasa. Three months after the film’s release, Kurosawa’s own One Wonderful Sunday premiered on July 1, 1947 to somewhat mixed reviews. 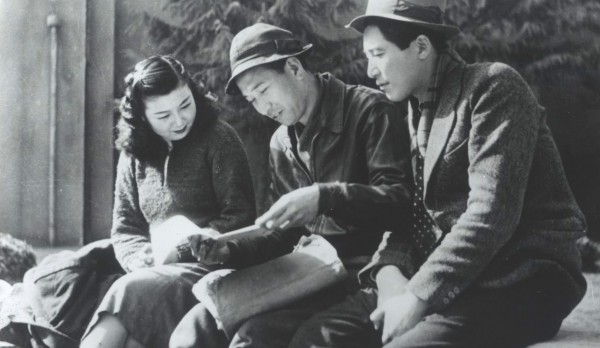 One Wonderful Sunday reunited Kurosawa with his childhood friend and novelist Keinosuke Uekusa, with whom he shared the writer’s credit. On the surface, the film is a relatively uncomplicated and sentimental post-war love story which shows the influence of Frank Capra, D. W. Griffith and F. W. Murnau. When looked a little more closely, however, its true nature becomes apparent as a sharp commentary on the everyday challenges faced by people in post-war Japan. One Wonderful Sunday earned Kurosawa the first major award of his directorial career, with the second annual Mainichi Film Awards in 1947 awarding him with its Best Director award. The film also won for Best Screenplay.

A third film released in 1947 with Kurosawa’s involvement was the action adventure Snow Trail (Ginrei no hate). It was directed by Senkichi Taniguchi from Kurosawa’s screenplay and debuted a young actor by the name of Toshirō Mifune, whom Kurosawa had helped to pick for the studio from a group of prospective new talents. It was the beginning of a creative pairing that would become one of the most famous in the history of cinema.

Kurosawa’s next film, Drunken Angel (Yoidore tenshi), is often considered the director’s first major work. Although the script, like all of the director’s immediate post-war works, had to go through forced rewrites because of occupation censorship, Kurosawa felt that Drunken Angel was the first film on which he was able to express himself freely. It was also his first time he was directing Toshirō Mifune, who would proceed to play leading roles in all but one of the director’s next sixteen films. While Mifune was not strictly speaking cast as the main character in Drunken Angel, his explosive performance as a young gangster suffering from tuberculosis so dominates the screen that it shifts the focus from the titular alcoholic doctor treating him, played by another major Kurosawa regular, Takashi Shimura, who had already appeared in all of Kurosawa’s early films apart from Sanshiro Sugata Part II and One Wonderful Sunday, and who would appear in altogether 21 of the director’s works. 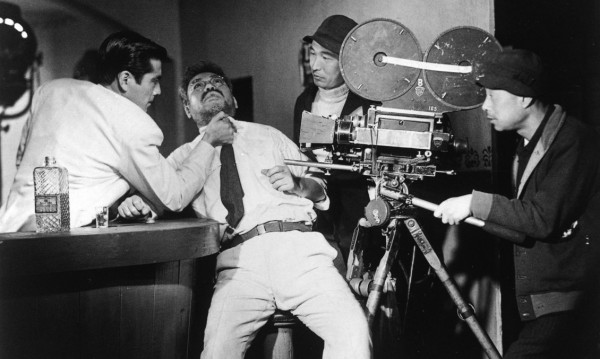 Preproduction on Drunken Angel started in November 1947, and the shooting wrapped four months later on March 10, 1948. The film premiered in Tokyo on April 27 1948 and received rave reviews, being the first Kurosawa film to be selected as the best film of the year by the prestigious Kinema Junpo magazine. The film did well also at the 1948 Mainichi Film Awards where it took home awards for Best Film, Best Cinematography and Best Score.

It was not all happiness and roses, however. During the final weeks of shooting Drunken Angel, the health of Kurosawa’s father had declined sharply while the son, pressured to wrap up the production, could not travel to be at his side. When the news reached Kurosawa about his father’s death at the age of 83, he went out to wander aimlessly in the streets of Tokyo. While there, his sorrowful mood was magnified by hearing the song “The Cuckoo Waltz”. Moved by this experience, the piece also made its way into Drunken Angel, where the cheerful song was used in a very similar manner to emphasise a character’s emotional suffering. This is the first example of a type of musical counterpoint that Kurosawa would go on to experiment on with his new composer Fumio Hayasaka, with whom Kurosawa would develop an extremely close working relationship and who would, until his untimely death in 1955, score all but one of the director’s next eight films.

For much of the rest of 1948, film production at Toho was halted due to a union strike and the only film in production with Kurosawa’s involvement was The Portrait (Shozo), released in August by the competing studio Shochiku and filmed from Kurosawa’s screenplay by Keisuke Kinoshita. Unable to work on a new film and faced with the need to support his wife and young son, Kurosawa decided to direct and tour with two stage plays: Anton Chekhov’s A Marriage Proposal and a play based on Drunken Angel which starred many of the film’s actors, including Mifune and Shimura. When the Toho strike finally ended, it resulted in a number of workers walking out and establishing the rival film studio Shintoho. Disappointed in Toho management and its handling of the strike, also Kurosawa decided to leave the studio that had nurtured his career and accepted an offer from Daiei studios.

Already before the latest Toho strike, Kurosawa together with producer Sōjirō Motoki and fellow directors Kajiro Yamamoto, Mikio Naruse and Senkichi Taniguchi had formed a new independent production unit called Film Art Association (Eiga Geijutsu Kyōkai). For their first release and Kurosawa’s first film for Daiei, Kurosawa turned to a contemporary play by Kazuo Kikuta, and together with Taniguchi adapted it for the big screen. The Quiet Duel (Shizukanaru Kettō) starred Toshirō Mifune as a young doctor struggling with syphilis, a deliberate and arguably successful attempt by Kurosawa to break the actor away from being typecast in the sort of gangster roles that he had almost exclusively portrayed until then. Released on March 13, 1949, the film was a box office success but is generally considered one of the director’s lesser achievements.

Following the resolution of the Toho strike, Kurosawa’s backlog of screenplays could also be moved into production, and so 1949 saw the production of no less than four more films co-written by Kurosawa. Jakoman and Tetsu (Jakoman to Tetsu) and Escape at Dawn (Akatsuki no dasso) were co-written and directed by Senkichi Taniguchi, while The Lady from Hell (Jigoku no kifujin) was directed by Motoyoshi Oda. The fourth film, released on October 17, was directed by Kurosawa himself and it was called Stray Dog (Nora inu). Like its predecessor, Stray Dog was produced by Film Art Association, but this time in collaboration with Shintoho, while being released through Toho. 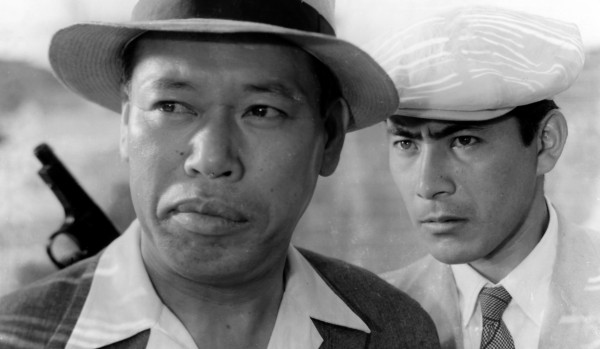 If No Regrets For Our Youth had been the first instance of Kurosawa’s directorial voice and Drunken Angel the director’s first major work, Stray Dog is often considered his first masterpiece. As such, it is the most celebrated of Kurosawa’s immediate post-war works and explores the mood and direction of a recovering Japan while following the story of a young detective played by Mifune obsessing over the theft of his service hand gun. Adapted from an unpublished novel written by Kurosawa in the vein of Georges Simenon, it was the director’s first collaboration with screenwriter Ryūzō Kikushima, who would later help to script eight other Kurosawa films, while director Ishirō Honda worked on the film as a second unit director. Stray Dog was a great commercial success and well received by critics, placing number three on Kinema Junpo’s list of the year’s best films and winning Best Actor (Takashi Shimura), Best Cinematography, Best Art Direction and Best Score at the 1949 Mainichi Film Awards.

Immediately after Stray Dog, Kurosawa began working on his next film, Scandal (Sukyandaru). Inspired by the director’s personal experiences and anger towards tabloid journalism, the film is an ambitious mixture of courtroom drama and questions about free speech and personal responsibility in post-war Japan, but it is generally considered somewhat of a failed attempt despite being the first of Kurosawa’s films to not suffer from any type of censorship intervention. Produced and distributed by Shochiku, the film had its premiere on April 30, 1950 but failed to garner the type of critical or commercial success given to Stray Dog.

Three more Kurosawa penned films followed in 1950. He co-authored the screenplay to Isamu Kosugi’s Tetsu of Jilba (Jiruba no Tetsu) and Masahiro Makino’s Fencing Master (Tateshi danpei), but it would be Kurosawa’s own film Rashomon, that would go on to introduce him to a whole new audience.