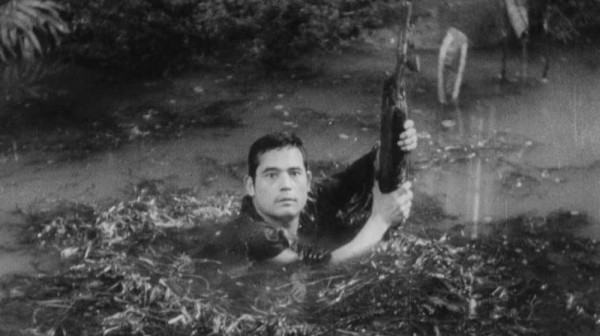 For Kurosawa, Kajirō Yamamoto’s Horse (1941) had served as something of a graduation work from his director’s apprenticeship, and for the next two years Kurosawa concentrated on screenwriting, searching for a story that could serve as his directorial debut. His efforts during this time produced no less than twelve screenplays, two of which were filmed by Toho: Currents of Youth (Seishun no kiryu) was released in February 1942 and The Triumphant Song of the Wings (Tsubasa no gaika) in October the same year, while two unfilmed screenplays – Snow (Yuki) and All is Quiet (Shizunakari) – won awards from the Ministry of Information, a wartime body that promoted nationalistic themes.

Japan had been at war since its invasion of China in 1937, had formally joined the Axis Powers in 1940, and had ignited a more global conflict in December 1941 by attacking British and American holdings, including Pearl Harbor. Many Japanese filmmakers were drafted to serve overseas, but thanks to his official status as physically unfit to serve which he had obtained a decade earlier from a friendly doctor, Kurosawa could continue working as a film director. But just like with anyone else, the war effort affected also his life. Film production was slowing down and it was also increasingly closely scrutinised by the government’s wartime censorship boards. Kurosawa’s first attempt at launching his career came to a halt in pre-production when censors rejected his script for A German at Daruma Temple (Daruma-dera no doitsujin), while his second attempt with Three Hundred Miles Through Enemy Lines (Tenkichu odan sanbyaku ri) was turned down by his film studio, who could not afford to produce it due to wartime cuts.

Towards the end of 1942, novelist Tsuneo Tomita published his judo novel Sanshiro Sugata. Having been intrigued by earlier advertisements, Kurosawa bought a copy of the book on its publication day, devoured it in one sitting and immediately asked Toho to secure the film rights. Kurosawa’s instincts to move fast in the matter proved correct, as within a few days three other major Japanese studios were also after the same rights. Toho prevailed, and Kurosawa was finally in pre-production on what was to become his directorial debut.

The filming if Sanshiro Sugata began on location in Yokohama on December 13, 1942. In his autobiography, Kurosawa recalls how strange his own voice sounded when he first called “action” – something that he had done countless times as an assistant director. The production proceeded without major hiccups but getting the completed film past the censors was a different matter. Despite its propagandist qualities, the censorship board saw the work as too “British-American”, and it was only through the intervention of director Yasujirō Ozu that Sanshiro Sugata was finally accepted for release and came out on 25 March 1943. Kurosawa had just turned 33.

Sanshiro Sugata was met with a very positive reception and turned into both a critical and commercial success. Yet, not quite everything went according to plan as despite originally allowing the film to be shown with Kurosawa’s own cut, the wartime censorship office soon decided to remove some 18 minutes of footage for all subsequent screenings. Although around eight minutes of the removed footage has later been recovered, we no longer have Kurosawa’s original cut for the film, and the remaining ten minutes are now considered lost.

Following the success of Sanshiro Sugata, the Japanese Navy commissioned Kurosawa to create a propaganda film about their iconic Zero fighter aircraft, but the project failed to take off as the military lacked the necessary resources for a production of the planned scale. Instead, Kurosawa began working on a story about female factory workers. The Most Beautiful (Ichiban utsukushiku) is a fairly straightforward propaganda film which Kurosawa and his crew filmed in a semi-documentary style between January and March 1944. In order to coax out realistic acting performances, Kurosawa’s approach was to have the actors and crew live in a real factory throughout the shooting period, eat the factory food and call each other by their character names. The director would later use similar methods on many occasions during in his career. 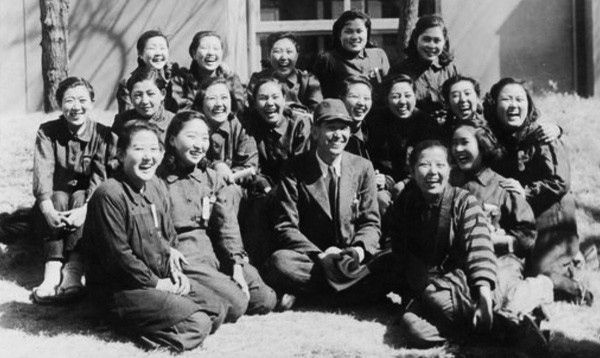 Kurosawa and members of the female cast on the set of The Most Beautiful (1944)The Most Beautiful was released on April 13, 1944. During the production, the actress playing the president of the women workers, Yōko Yaguchi, had as the representative of the actresses been in constant conflict with Kurosawa, and through these arguments the two had become to know each other fairly well. They continued to stay in touch after the production, and the two were married on May 21, 1945, with Yōko two months pregnant. The couple would stay together for the rest of their lives, until Yōko’s death in 1985.

Kurosawa, whose director’s income was hardly sufficient to support himself, let alone a family, continued to write screenplays. Wrestling-Ring Festival (Dohyosai) had been directed by Santaro Marune for release in March 1944, while the Kiyoshi Saeki directed Bravo! Tenbare Ishin (Tenbare Ishin tasuke) opened in cinemas in January 1945.

Kurosawa had also been made to direct a film that he had little interest in making. Sanshiro Sugata Part II, a half-hearted sequel to his debut work, premiered on May 3, 1945. The film, at times blatantly propagandist, is generally considered his weakest. It largely traces through the same paths as the original, but without the same kind of enthusiasm as the director had for his debut work, with Donald Richie summing it up by writing that “in it we have what the original Sugata might have been had an ordinary director doneit.” (Richie 41) It is, however, not entirely without merit and continued Kurosawa’s development as an experimental director, featuring among other things his first axial cuts.

After Sanshiro Sugata Part II, Kurosawa planned to film his screenplay The Lifted Spear (Dokkoi kono yari), based on the same historical events that he would finally four decades later revisit in the 1980 film Kagemusha, but the project was cancelled in pre-production due to a lack of funds. To keep momentum on, Kurosawa then quickly moved on to write a film that would be both censor friendly and less expensive to produce. The resulting The Men Who Tread on the Tiger’s Tail (Tora no o o Fumu Otokotachi) was based on the Kabuki play Kanjinchō and completed in September 1945.

But despite shooting the film with frantic speed, Kurosawa had been too slow. A month before the film was finished, Japan had surrendered to the Allies and the American Occupation of Japan had begun. The values promoted in The Men Who Tread on the Tiger’s Tail were now seen too feudal by the new occupation censors, and the work was banned before its release. It would ultimately be released almost a decade later in 1952. Ironically enough, while in production the film had already been earmarked by Japanese wartime censors as too western and democratic, and the film would most probably not have seen the light of day even had the war not ended before its completion.