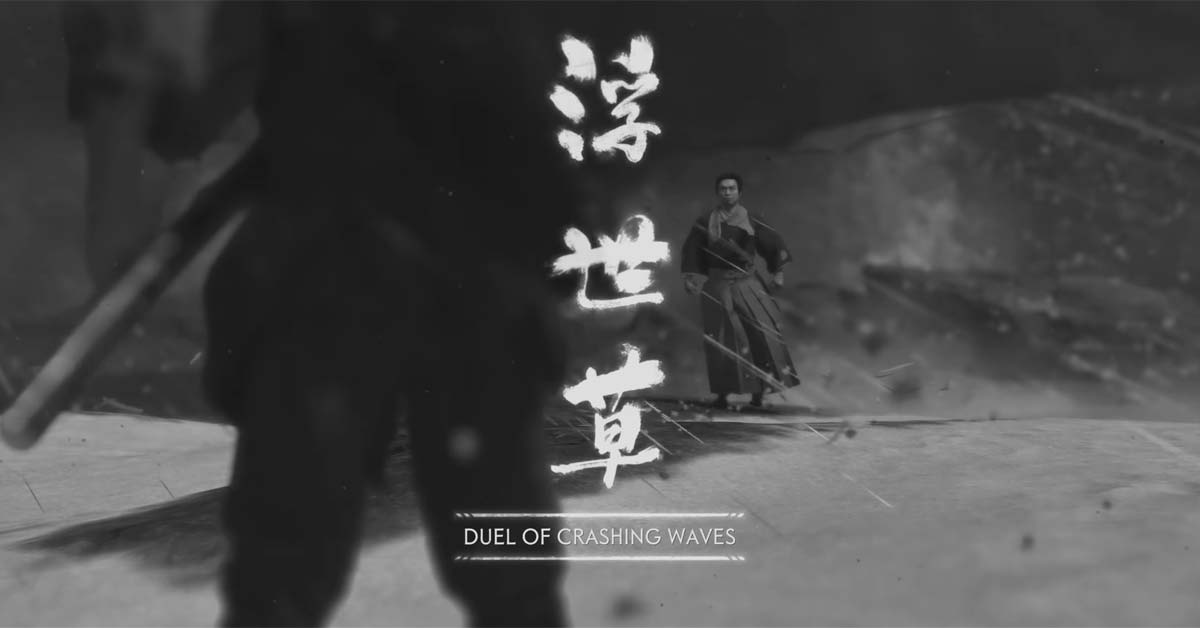 The developers of the soon-to-be-released samurai video game Ghost of Tsushima have announced that the game will ship with what they call the “Kurosawa Mode”. The setting will basically turn the game black-and-white, with adjustments on grain, contrast and audio, and apparently also increasing weather intensity, at least for the wind. According to Entertainment Weekly, the developers have received the Kurosawa estate’s blessing for using his name.

I have been keeping an eye on this game for a while, as this is not the first time that the developers talk about their game in terms of Kurosawa’s works. As I understand it, the mode that they now call the “Kurosawa Mode” is what they previously called “Samurai Cinema”, discussed and displayed in the video below from earlier this year (video should start at 16:21).

If you are interested in the game, you may want to check out the full video.

Personally, I have yet to really get any particular Kurosawa vibes from the game, even with the black and white filters. It looks to me more like a samurai version of open world games like Assassin’s Creed and Red Dead Redemption, which of course may not be a bad thing, as those games have definitely been popular. The developers have also stressed the historical accuracy of their game, which is set in the Mongol invasion of Japan in 1274, and it will be interesting to see how this American developer has succeeded in that task, as well as in converting historical realism into interesting story and gameplay mechanics. Again, the videos that I have seen haven’t quite convinced me yet.

I am, of course, keeping my fingers crossed that the game does well. Maybe some young gamers, after testing this Kurosawa mode thing, will do some research and discover a treasure trove of classic Japanese films that will open up a whole new world of art and entertainment for them; not only Kurosawa, but also Ozu, Mizoguchi, Naruse and others. Who knows. It is in any case great to see Kurosawa’s name being kept alive and relevant this way.

This is not the first time that the Kurosawa estate has been involved with video games. Kurosawa Production Co was one of the producers of Seven Samurai 20xx and were also involved in the early development of the 2017 game Nioh, which was said to have originated from an unfilmed Kurosawa screenplay, but as the project developed, both the Kurosawa links and the Kurosawa Production Company’s involvement vanished, with the game seemingly going to a different direction.

Ghost of Tsushima will come out on July 17 as an exclusive for Playstation 4. Drop a note below if you are looking forward to the game!

Update: The gaming website IGN has posted a video which compares the standard gameplay with the Kurosawa Mode. What are your thoughts?

I have updated the article to include a new video that compares the Kurosawa Mode with the game’s standard gameplay mode. What do you think, are the black and white switch, enhanced wind and the Japanese dub enough to make you think of Kurosawa?

The reviews for the game have been largely positive, although not overwhelmingly so. It seems like Ghost of Tsushima is a solidly made open world game that doesn’t really innovate, but offers a solid samurai experience to anyone who has always wanted to play Assassin’s Creed or Far Cry, but with samurai swords. I might do a review at some point, although the Playstation 4 exclusivity is pretty much keeping the game out of my reach at the moment.

I’m not a gamer (not because I don’t like them, but because I know I’d like it too much and would get nothing else done if I started), but I can’t help thinking that this would make a great movie.

I wonder if they will bring in an Ozu mode too. Now that would be a challenge for most gamers.

While looking at the Kurosawa Mode footage, I wonder if they could have flattened the depth of the image and maybe moved the player character a bit further from the camera without it affecting the game experience too much, as that would probably have given the game more of a Kurosawa look, especially if they were trying to emulate his 50s and 60s visual style. Harsher shadows might also have helped to sell the idea better. But that would probably have required a totally different lighting design.

Tsushima‘s is not a game genre that I particularly enjoy, but I am still interested in trying the game one day, especially to play it through using the Kurosawa Mode with the Japanese dub.

Some of the game systems in the 80s sort of kind of forced an Ozu mode into all games, as you couldn’t really scroll the screen, therefore being confined to still cameras and quick cuts whenever characters moved out of the shot. I can’t quite remember ones with a “tatami shot” style framing though! Or ones with vases between cuts.

There is a pretty interesting discussion of the game’s Kurosawa influences here: