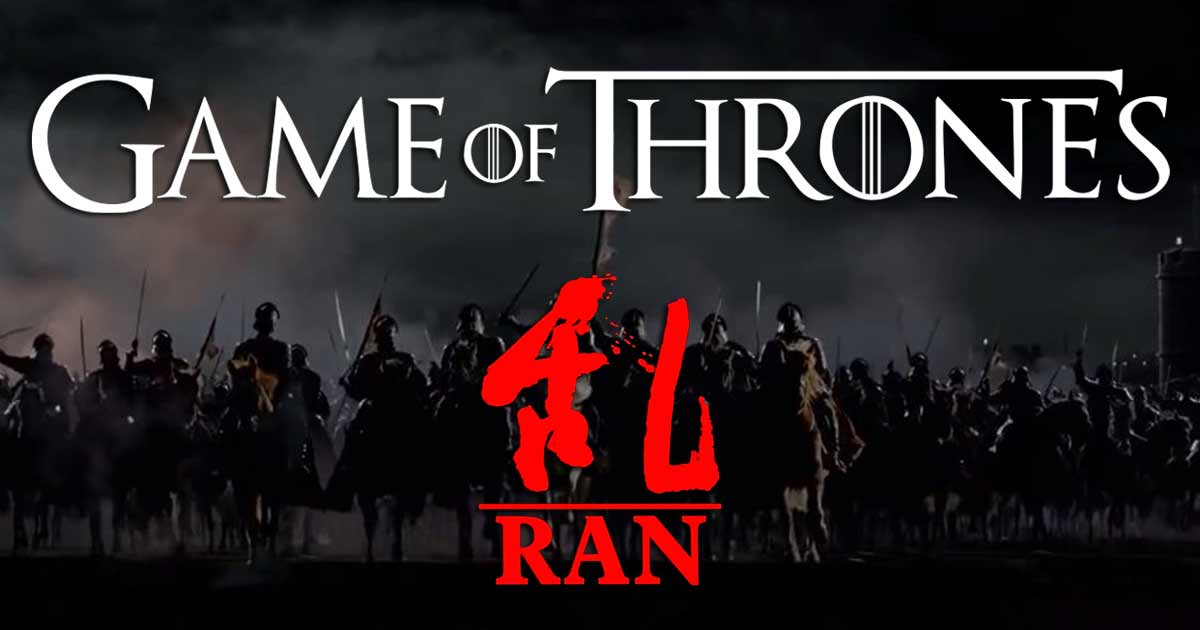 In an interview with Entertainment Weekly, director Miguel Sapochnik has talked about the making of last Sunday’s episode of the hit series Game of Thrones. The article contains spoilers.

The discussion centres around a big battle scene for which the director prepared by watching “every pitch field battle I could find (footage of real ones too), looking for patterns — for what works, what doesn’t, what takes you out of the moment, what keeps you locked in.” In the end, “the big reference was Akira Kurosawa’s RAN.”

And so Kurosawa continues to influence popular culture.

HBO has also prepared a ten minute mini-documentary about the episode that you can watch below:

In the interview, Sapochnik also makes a good point about the freedom of CGI often potentially lessening the impact that a scene like this can have. HBO apparently did its best to make things real, as the scene was shot with 500 extras.

Anyone here following the series?

No, but a lot of people I follow on Twitter do. (I have seen episodes from earlier seasons.) It’s not surprising that he singles out Kurosawa. He may not have staged a lot of them, but his battle scenes were well-crafted and realistic.

I only followed the first series – I loved it, but I don’t have a subscription to that channel – I was hoping it would turn up on Netflix but that looks unlikely. Some day I’d like to binge on the dvd’s perhaps, but its become so pervasive its almost impossible to avoid spoilers. I read the first book – a great read, but I avoided following on for just that reason.

It does make you wonder what Kurosawa would have done if he had CGI. For me, excessive use of CGI has ruined some ‘big spectacle’ films because its become an easy short cut for the director and is often far too easy to spot, it ‘brings you out’ of the scene rather than enveloping you in the spectacle. I suspect that like the Game of Thrones director he would have been much more selective in its use.

The logistics of shooting those big scenes have always fascinated me. Just two weeks ago on my way to work I walked past a big warehouse and there was a huge queue outside of unusually hairy people for Dublin – they were casting for some big scenes for the series ‘The Vikings’. Just recruiting enough extras seemed a big job in itself. There is a flat plain outside Dublin called the Curragh which has been used for many battle scenes from Laurence Oliviers Henry V to Braveheart. Its chosen because its near an army base (lots of trained extras), some horse racing stables, and the landscape is well drained with enough natural folds that clever camera moves can make a few hundred extras look like thousands.

Yes to what Ugetsu said about CGI. Directors rely on it far too much.

Ugetsu: It does make you wonder what Kurosawa would have done if he had CGI.

I think it’s telling that when he had CGI at his disposal, he employed it for storylines like Dreams and Rhapsody in August, utilising it not for spectacle or realism but for more symbolic purposes. It’s of course difficult to say whether he would have continued to use it in a similar vein later as the technology evolved.

But I suppose the situation was in some ways similar to when Kurosawa moved onto colour film. Kurosawa didn’t really aim for realism with his use of colour in Dodesukaden, and while later films toned this down a bit, his use of colour remained relatively expressive, another layer of meaning.

This makes me think that had Kurosawa had another decade or two, he would have used CGI not for stylistic or realistic purposes, but to explore the potential that it offers for the director in his pursuit to find new cinematic meanings and expressions.