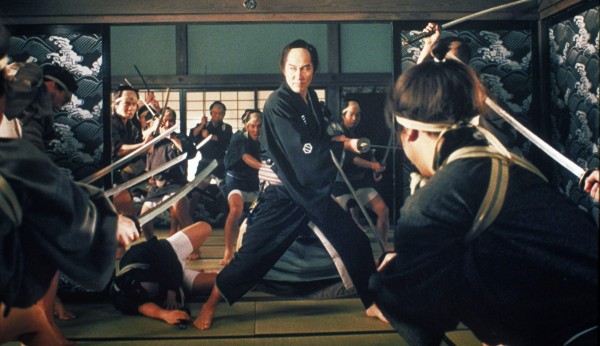 It was exactly 15 years ago today, on May 13, 2000, that Kon Ichikawa‘s samurai comedy Dora-heita (“Alley cat”) was released in Japan. It was the second (and to date last) film to be posthumously made from a screenplay that Akira Kurosawa had worked on.

The film’s screenplay was originally written in the late 1960s by Ichikawa, Akira Kurosawa, Keisuke Kinoshita and Masaki Kobayashi, and was intended as the first film to be produced by the newly formed production company Club of Four Knights. However, due to funding difficulties, Kurosawa’s Dodesukaden was made instead.

Like Dodesukaden, Red Beard and Sanjuro, the film is based on a novel by Shūgorō Yamamoto. Of the three films, Dora-heota most resembles Sanjuro, although it is arguably less successful in its presentation and comic timing. Although it opened commercially in May 2000, the film had actually been first screened at the Berlin Film Festival in February that year.

Check out the trailer above and then head over here for more information and discussion about Dora-heita, which was our film club’s film of the month last June.