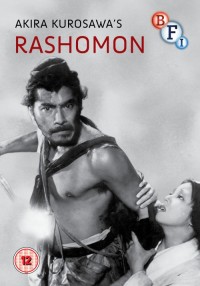 BFI has just announced an approximate release date for their new Rashomon Blu-ray, which should be available in April this year.

No specific date is yet given, and neither are details out yet on the exact contents of the release. As it is a BFI release, the Blu-ray will be Region B encoded (Europe, Africa, Middle East, Australia, New Zealand).

Let’s hope that the release will contain something new and unexpected in terms of extras!

Other titles in BFI’s spring lineup can be found on their website.

They should sell it in four separate boxes, and leave you to guess which one has the real disk…

Haha! But surely none of those discs would objectively contain the actual film? Instead, one disc would have The Outrage, another The Usual Suspects, third one Vantage Point, and the last disc would be Hoodwinked! with the option of an alternate ending.

It’s all cool I suppose as long as the set doesn’t include Tajomaru. Which I have, for some reason beyond my comprehension, recently had a strong desire to watch again.