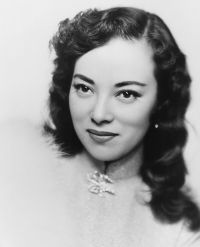 Actress Shirley Yamaguchi (born Yoshiko Yamaguchi, also known as Yoshiko Ōtaka and Li Xianglan) has passed away due to heart failure at the age of 94. Born to Japanese parents in Manchuria, Yamaguchi was not only a successful actress until her sudden retirement in 1958, but also a singer, TV personality and a politician who served for almost two decades at the Japanese parliament.

During her acting career, Yamaguchi appeared in one Akira Kurosawa film, giving a memorable performance opposite Toshiro Mifune in the 1950 work Scandal. We have discussed her contribution to the film in Casting Yoshiko Yamaguchi.

Yamaguchi was something of a controversial and mysterious figure, and her life has attracted many interpreters, having been the basis for a Japanese musical, at least two TV movies and a fictionalised biography The China Lover by Ian Buruma. Yamaguchi’s Wikipedia page also mentions Hirokazu Koreeda as planning a film based on her life.

Sad news indeed. She does seem to have been quite remarkable in many ways – I loved her performance in Scandal. There may have been better actresses at the time, but certainly few with her charisma.