Tora! Tora! Tora! screenplay by Kurosawa, Oguni and Kikushima to be published electronically 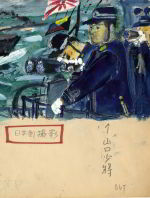 If I’m deciphering today’s Japanese news reports correctly, an HTML5 based e-book format that can be read online in your browser will be launched in Japan on the 8th of December. The first book to be released on the platform is a draft screenplay of Tora! Tora! Tora! written by Akira Kurosawa, Hideo Oguni and Ryuzo Kikushima.

The screenplay in question is the 659-page version that Kurosawa worked on before being famously fired from the project, and not the final and much shorter shooting script that was used. It is apparently a free publication, and appears to come with storyboard images. The press release also mentions this to be the first time that the screenplay is published, but it remains unclear how the release differs from the versions that have already been available through the Akira Kurosawa Digital Archive.

In addition of celebrating the release of the new distribution platform, the e-book’s publication also coincides with the 70th anniversary of the attacks on Pearl Harbor, on which Tora! Tora! Tora! is of course based. The e-book requires a modern HTML5 capable web browser (Internet Explorer is currently not supported), and can be accessed regardless of your operating system or device, in theory allowing access through computers, smart phones, tablets and e-readers such as Kindle.

The book should be available from binb-store.com on the 8th of December, midnight Japanese time.

For information in Japanese, see for instance the original press release, Asahi.com and eBook User.

They have now also announced a round table discussion on Tora! Tora! Tora!, which will start at 22:30 Japanese time on the evening of December 7, just before the midnight launch of the new e-book distribution platform and the e-publication of the screenplay through it. The discussion will be streamed live on Voyager’s ustream channel, in case you are interested (and can follow Japanese).

The talk will be between professor Yasuki Hamano (Communication Theory and Media Studies at University of Tokyo), Shinji Higuchi (special effects specialist, storyboard artist and director — he directed The Last Princess, among other things), Keiichi Hara (anime director) and Masaaki Hagino (president of Voyager, the company behind the e-book platform).

If you are interested in checking it out, the screenplay can now be accessed here. Clicking on the left side of the screen (or doing a wiping gesture) turns the page forward.

In technical terms I think that the system works pretty well. It seems to know the dimensions of your screen, and adjusts the displayed content accordingly. I tested this with my phone, where turning the screen from portrait to landscape mode automatically also re-renders ebook page. Magic!