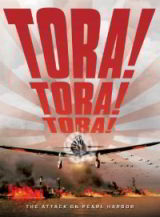 Back in 2008, Kurosawa Production teased us with a range of events and releases for Kurosawa’s centenary, none of which really materialised as the centenary year came and went. One of these non-releases was unreleased footage from Tora! Tora! Tora!, which Kurosawa shot before he was fired from the project. There was talk about altogether 8-12 minutes of raw footage having been discovered somewhere.

Today sees the release of a brand new American blu-ray edition of Tora! Tora! Tora!. It is a restored full length print and comes with a booklet, documentaries, trailers and a commentary by director Richard Fleischer and Stuart Galbraith IV, the Japanese film expert probably best known to us as the author of Kurosawa’s definitive English biography.

What the blu-ray does not include is unreleased footage shot by Akira Kurosawa. But apparently, it wasn’t for the lack of trying. In a Honolulu Pulse interview, the man in charge of the restoration process, Fox Entertainment’s Schawn Belston, mentions that the legendary Kurosawa footage may in the end not even exist:

The footage Kurosawa shot is the Holy Grail of Tora! Tora! Tora! restoration, and Belston said they were unable to locate it. “We had every bit of Tora! Tora! Tora! footage sent to our lab, and it wasn’t there. That footage is legendary, but to the best of our knowledge, it doesn’t exist.”