All the Emperor’s Men to be published later this year 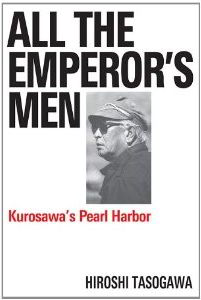 About a year and a half ago, we got news of a new Kurosawa book to be published in English. All the Emperor’s Men: Kurosawa’s Pearl Harbor by Hiroshi Tasogawa would look at what went wrong for Kurosawa during the production of Tora! Tora! Tora!, finally tackling the subject so many have wondered about. Then, just before it was suppose to go into print, the book got cancelled, with no information about a possible future publication date.

Whether it comes out in October or November, the publication of the book is excellent news. The book concentrates on the period of time between 1966 and 1968, when Kurosawa worked on the Hollywood World War II spectacle Tora! Tora! Tora!, responsible for the Japanese half of the film. What started as a gigantic undertaking for an energetic Kurosawa and his young production company ended in December 1968 after much hardship and only three weeks of actual shooting, with the Hollywood producers effectively firing the director and suggesting that he was mentally unstable. How things managed to come to this has been the topic of much speculation, but fairly few actual facts have been available.

All the Emperor’s Men: Kurosawa’s Pearl Harbor sets out to unveil the mystery. Hiroshi Tasogawa worked as a translator, interpreter and researcher for Kurosawa during the time, allowing him an insider’s view into what really happened. Equally importantly, the author, who has also worked as a journalist, reporter and academic, has unearthed a cache of American documents dealing with the production and Kurosawa’s role in it, giving him another vantage point to the events. Tasogawa’s earlier Japanese book on the subject has been very well received in Japan, winning four major awards.

For more information about All the Emperor’s Men, check out the Kurosawa books section.

The publisher responded to my question saying that the anticipated publication date is October 23, 2012. So, three weeks from now. Really looking forward to this.

An update on the update: apparently, it’s October 23 in the US and November 23 elsewhere. But in either case, “soon”. 🙂

An early Christmas present for myself! Thanks for keeping us posted Vili!

In case someone is wondering why they got a new comment notification but don’t see anything new here: There was a comment here by Fred, but I decided to move it to the review page, as I felt that it has a better home there.