Book about Kurosawa and “Tora! Tora! Tora!” to be published in July 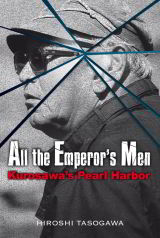 After 1965’s Red Beard, Akira Kurosawa’s career took a rather strange turn as he found himself working on a Hollywood film, and for the first time in his career, operating outside of the Japanese studio system. His first attempt with Runaway Train quietly disintegrated into nothing, but the second Hollywood funded project that he signed for would have major consequences for his career. Unfortunately, not in a good way.

For about two years between 1966 and 1968, Kurosawa worked on the Hollywood World War II spectacle Tora! Tora! Tora! as the person responsible for the Japanese half of the film. What started as a gigantic undertaking for an energetic Kurosawa and his fledgling production company ended in December 1968 after much hardship and only three weeks of shooting, with the Hollywood producers effectively firing the director and suggesting that he was mentally unstable. How things managed to come to this has been the topic of much speculation, but fairly few actual facts have been available.

Hiroshi Tasogawa‘s new book All the Emperor’s Men: Kurosawa’s Pearl Harbor sets out to change this. Tasogawa worked as a translator, interpreter and researcher for Kurosawa during the time the director worked on Tora! Tora! Tora!, and can therefore offer an insider’s view into what really happened. Equally importantly, the author, who has also worked as a journalist, reporter and academic, has unearthed a cache of American documents dealing with the production and Kurosawa’s role in it, giving him another vantage point into the course of events.

All the Emperor’s Men will be published by Kodansha International in early July 2011 in Europe, and possibly about a month later in North America. Tasogawa’s Japanese book on the subject, 黒澤明vs.ハリウッド― (Kurosawa Akira vs. Hollywood, 2006) has been very well received in Japan, winning four major awards. It is therefore with high expectations and much excitement that I am looking forward to his new book.

For more information, I very much recommend Kodansha Europe’s product page for the forthcoming book, which includes a lengthy introduction to the book by the author himself.

As mentioned earlier, All the Emperor’s Men: Kurosawa’s Pearl Harbor should be out in Europe in early July, and sometime Augustish in North America. For more information about books on Akira Kurosawa, check out Akira Kurosawa bibliography.

Looks very interesting. Reading that preface, its hard not to feel that it was an enormous lost opportunity – from his description of a ‘Gods eye view’, it would have been almost Ran-like.

I think Tora Tora Tora was the first film I ever saw in the cinema, I must have been 4 or 5 years old (I’m sure nowadays it would be deeply frowned upon to bring a five year old to a war movie). I have a vague memory of wishing there were more exciting shots of planes, and getting irritated at all those people talking. I don’t think my opinion about it has changed much.

I’m quite excited about this book. It has the potential to be something quite interesting!

Based on the introduction that we have been given, the only thing that I am a little worried about is that it could be an attempt to clear the names of some individuals (most crucially Tetsu Aoyagi, the then managing director of Kurosawa Production) who have been considered by biographers like Galbraith as having caused most of the problems by making bad decisions behind Kurosawa’s back. Since Tasogawa appears to have been an integral part of what was going on at the time, there is always the possibility that he had some personal motive for writing the book now.

However, I must stress that this is just one distant possibility, and I certainly won’t judge a book by a vague thought that I got from its cover blurb. And as I said, I’m really excited by this book, and very much in a positive way. Also, the very positive critical response that the Japanese book “Kurosawa vs. Hollywood” has had in Japan would seem to indicate that there is much more to Tasogawa’s research than just an attempt to serve some personal goals.

I think I actually still haven’t seen Tora! Tora! Tora!… I’m still waiting for that new super edition that they promised us for Kurosawa’s centenary. You remember, the one that was supposed to include some actual footage shot by Kurosawa? Just like all the other AK100 plans, it seems that nothing ever came out of it. We didn’t see a proper world tour, an animated film, a computer game, or the noh documentary either…. oh well. Maybe for AK125, then.