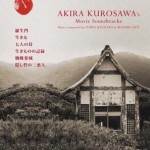 Some of the most memorable soundtracks from Kurosawa’s films have been released, and on vinyl of all formats. This deluxe gatefold 4 LP box set with full colour artwork was manufactured by Doxy, and includes music from six of Kurosawa’s works: Rashomon (1950), Ikuru (1952), Seven Samurai (1954), Record of a Living Being (1955), Throne of Blood (1957) and The Hidden Fortress. Apparently, the set is available only in limited numbers.

It appears to be quite difficult to locate a copy, but there is supposedly one that can be bought through Amazon.com, while Boomkat also lists it, although currently marks it out of stock.