The first poster for the Shinji Higuchi directed remake of The Hidden Fortress, set for release in Japan on May 10, 2008, has been posted online. As a fresh, and considering the subject matter also somewhat surprising, departure from the current norm, the poster is hand drawn by the well-known manga artist Takehiko Inoue. Inoue is perhaps best known for his series Slam Dunk and Vagabond, the latter of which is a retelling of the Miyamoto Musashi legend.

The poster gives us the first glimpse of Miyamoto Takezou, the new character that replaces the two peasants in the original movie. In the poster, he is shown staring trough what look like prison bars. 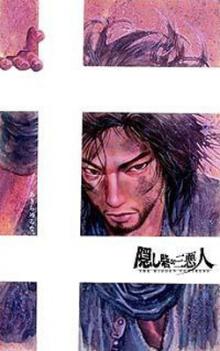 Takezou is played by the singer, actor and heartthrob Jun Matsumoto. The rest of the cast includes Masami Nagasawa, Hiroshi Abe and Daisuke Miyagawa.

The film now also has a flash-based website: kakushi-toride.jp. Shooting of the film started in November 2007, and the movie is set for release in Japan on May 10, 2008.

Poster is nice, but considering who draw it, I can already tell whom they want to appeal to, and how.

Like a ranted about in some other post, about how we will see more samurai style remakes being made, its not because of they are great movies and the Japanese are aware of them, its because they influence many mangas, and are apart of pop culture. In which most of the reader are completely unaware of what movies these mangas are inspired by. So more then likely it will be giving a main stream, slightly “over-the-top” style common with samurai mangas, making a completely pointless remake.
I could be wrong, but I doubt it.

I dont understand the reasoning behing replacing the two shallow peasents characters whoose only depth came from refecleting off each other, with just one new character.
It would seem to me, to pull off a single character based on two, you would have to deepen this Takezou character, but doing so would defeat the idea of the peasants simply being greedy, and mostly a means for comic relief. ‘
We like this peasants even though they are bad characters, simply because they are so simple, its hard to judge them for their flaws.

I could go on and on, about the dangers of casting popular singer/actor combos, but in short is a bad idea, especially if there fan base comprises of preteen girls.

I dont think this movie will follow the original as close as Sanjuro did.

Oh and the director is not promising, the guy has made horrible sci-fi and manga styled movies(1 I have seen), which only reinforces my belief the movie will be a like live action manga, and really suck.

I personally feel that the outlook for this is slightly more positive than what it was for the Sanjuro remake. As Jeremy also mentions, this doesn’t seem to be a similarly direct remake, possibly even more like an interpretation, so I’ll be far more interested in seeing how it turns out.

Then again, I originally tried to be positive about the Sanjuro remake as well, but pretty much ran out of steam when the first trailers came out. So, let’s wait and see.

In any case, as someone who when it comes to the Hidden Fortress has never quite “got it”, I would venture to suggest that there is very little to ruin in the film in terms of its story and narrative technique. Although, having said that, Jeremy just pointed out perhaps the only fairly interesting bit in the original — the peasants — and how those were the first aspect of the original to be changed. (When I say “the only interesting bit”, I of course mean sans filming technique and acting performances, which in the case of Kurosawa are always interesting for me.)

In any case, at least the poster beats the Sanjuro remake ten nil! Then again, most posters would.

But perhaps it is a good sign that we had Inoue working on the poster, and not for example someone like Akira Toriyama. Now, I am far from being an expert in Japanese comics (I am more into continental European works), but I have read and own the first dozen or so of the Vagabond series, and if the target audience of the film is anything like the target audience of that particular comic, at least we don’t have to expect Dragon Ball.

Vagabond is no Shakespeare, but at least to me it felt somewhat more mature and serious than most other manga that I have read. Then again, I read it in Japanese, so perhaps I just got it all wrong!

Well it is a nice poster, but since I am not Japanese or do not read Japanese, I really would have no idea this was a movie poster.

All that aside I am quite interested in seeing how this turns out, falling into Vili’s more positive camp, though I have heard of the director and seen some trailers for his films, which did not sit well with me.
And I must add the turnaround for this movie is pretty fast; pre to post to release in about 8 months!

Interesting to see these mangas being inspired by movies then being made into movies. Kind of like the musical films like Hairspary being turned into a real Broadway show then back into a movie… OK it really isn’t.

And just to add my twomanga cents.
I’ve never read much, just Miyazaki’s Nausicaa series and Tezuka’s Adolf and Phoenix series, though I find all three to be great works. Beyond that most managa I’ve seen just doesn’t appeal to me in art or story.