The second poster for Yoshimitsu Morita’s remake of Kurosawa’s Tsubaki Sanjuro has been made available on the movie’s official website. Here it is: 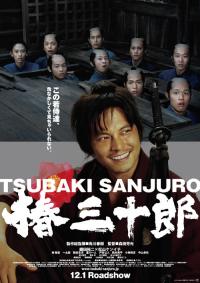 A bigger version can be seen at the official site.

As the poster points out, the film is to be released on December 1st.

Thanks to Twitch for the heads-up.

Hmm the fellow playing Sanjuro seems no older then the band of young samurai… And that poster just reminds me of the “whack a mole” games that you’d play at an arcade.

You’re right about the age of Sanjuro, though.

I always took it as the young samurai where in there 20’s, the ones in the poster appear to be kids. Perhaps it doesnt really matter that Sanjuro is too young looking as well as his followers, but it bothers me. I know they are intended to target a younger audience but I dont see why they couldnt let Sanjuro look older and more experienced.

I dont think Sanjuro has any business smiling, I really wish they would quite doing that. As for the kids, I thought it was a bit lame, but acceptable, til I read Ben’s comment about the wack a mole, now the poster is just funny, and not in a good way 🙂

Yay! I ruined the poster for two other people, although I think the poster did most of the work…
I just have to wonder what they’re going for here. Who are they targeting as their audience? Do young Japanese respond to this kind of marketing art? I don’t think so.
I mean yes we all are a bit biased because of AK’s Sanjuro but this would just look bad regardless in my book.
Even with this being a comedy I’d think you’d still have some sword play on the poster. Maybe later incarnations. December is awhile.