Ladies and gentlemen, boys and girls, here is the first Tsubaki Sanjuro poster for the Japanese remake that will open later this year: 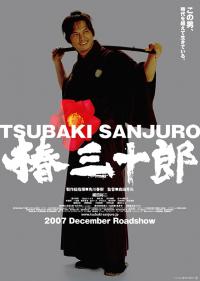 A bigger version can be seen at the official site.

For comparison’s sake (and we will be playing this game a lot in the upcoming months), here is one for Kurosawa’s 1962 original: 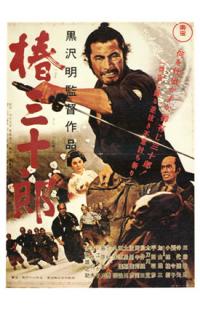 (Thanks go to Twitch for pointing me that the Tsubaki Sanjuro site had been updated).

OK seems to be playing up the comedy side of things. It really is quite a boring poster…

Wow, thats a crappy poster.
I hope the movie isn’t as boring and uninspiring.

The guy looks like he couldn’t defeat a stalk of wheat, much less have the intelligence to lead a group of man and devise a plan to rescue the Chamberlain. Hell he looks confused already 🙂
To me he also looks way too young, Sanjuro is suppose to be nearly 40 years old, and look like a man that you would follow, just because he looks like a man you should follow. This guy looks like a kid that should be chasing butterfly, not saving and taking lives.

I know its just a poster, and I shouldn’t put much weight on it, but its is very disappointing. This is first time, I’ve seen what Sanjuro is going to look like. I say wrongly casted already

Looking at the movie’s website, the press section only gives me more disappointment.

First the photos of the cast, I find disappointing in there appearance.

Second, from the best I can translate, it appears they are holding true to the “Sanjuro” and the character will indeed be 30 years old, rather then someone approaching 40.

Thirdly, if you recall awhile back when Vili mentioned the movie, I posted that all I wanted was the line “Well going on forty”. Looks like that is highly unlikely 🙁 –seriously now am upset 🙂

The site over and over mentions its a direct and much needed remake of “Kurosawa’s Sanjuro”. After reading though the site it appears to me its just simply a movie with the same title.

Indeed, he should look older and shabbier. While I think that the poster is not all that bad as a poster (I like its simplicity), it does seem somewhat too calm to promote “Sanjuro”.

The website would seem to suggest that this is the first in a series of posters, so let’s see what they have in store for us.

Well, I am consciously acknowledging that I am biased against this and any Kurosawa remake. Kurosawa’s films are incredible on their own. They stand the test of time. I think all movies are in varying degrees derivative, but remakes are the worst of the bunch. I am trying to give the movie the benefit of the doubt since I haven’t seen it yet, and it seems the director has won many awards for his other work, but this poster does not instill any great hope. It’s quite plain and says nothing of what the movie or story is about. The design of it is uninspired. I am not quite sure how to interpret the look on the actor’s face. With Mifune, clearly it looks like he is about to kick your ass – which is exactly in line with the character. In the new one, as Jeremy noted, the actor looks like a kid who should be chasing butterflies. Additionally, his hair bothers me immensely. Perhaps I am nitpicking. I wonder if I would feel differently knowing it was a continuation of the character in another story, rather than a direct remake.