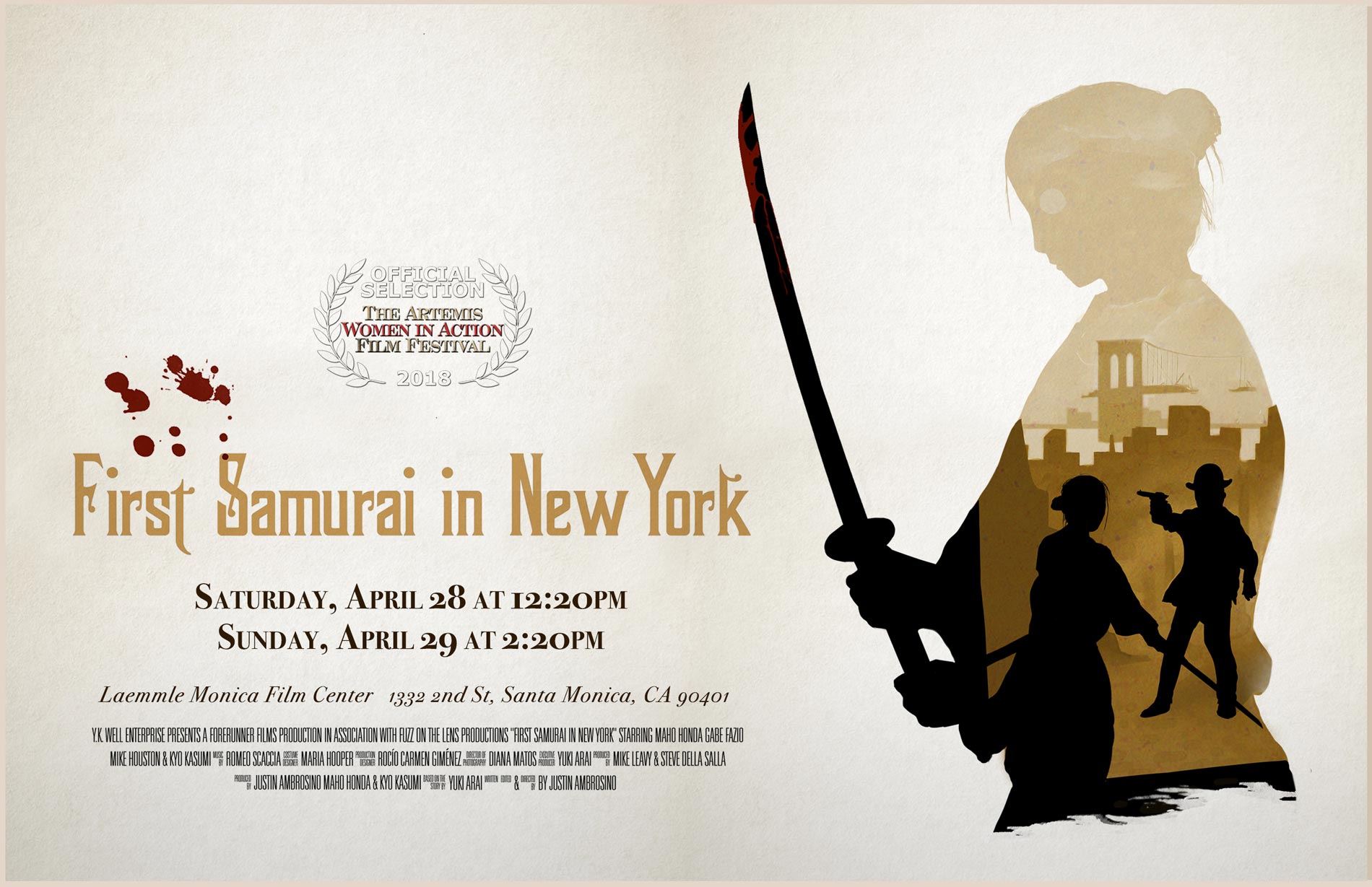 In the late 1800s, a Japanese woman, trained as a samurai by her late father, emigrates to New York in search of a better life… she finds Irish gangsters, racism, violence and death instead. Premiere this Saturday in Los Angeles, USA.

If you are a long-time visitor in these here parts, you may remember a short film called The 8th Samurai from about a decade ago. Created by an up-and-coming young director Justin Ambrosino, the film played around with the humorous idea that Kurosawa would originally have planned there to be eight samurai in what became his signature film Seven Samurai, and follows the story of that poor actor who got kicked out of the film the night before shooting was about to begin. These days, you can watch the 30-minute film on Vimeo.

But why watch old films when you can watch new ones? Ambrosino’s new short film First Samurai in New York will premiere this Saturday, May 28th, as part of the Artemis Women in Action Film Festival in Los Angeles, USA. It tells the story of a Japanese immigrant family in New York in the late 19th century.

When starting to work on the film, Ambrosino was inspired by historical events. “After hearing about the existence of female samurai who fought alongside the men, I wondered why this story was never told. It is true, fascinating and rich in drama – not just the action element but the struggle of being a woman fighting against, and alongside men, as well.”

As with The 8th Samurai, the director’s work continues to be influenced by Kurosawa. “I tried to imagine how Akira Kurosawa might have handled the material about the first Japanese immigrants to come to America, in terms of narrative and filmmaking style. Kurosawa always did a mix of realism with a heightened sense of the epic, the cinematic. And, of course, Kurosawa was known to have loved Westerns, so there was some thought about how he might see America through his eyes… though this takes place on the outskirts of Manhattan as opposed to the Wild West.”

“Also, people don’t talk a lot about Kurosawa and the way he wrote and directed female characters… if you look at even his first uncredited film as a director, Horse, with its female lead fighting to save her beloved colt, or The Most Beautiful, about the struggle of female factory workers demanding their rights, or One Wonderful Sunday, where the female character drives the couple’s emotional transformation, you can easily see that Kurosawa believed in the power of women to make real change and were a force to be reckoned with when push came to shove.”

Considering the themes of Ambrosino’s film, it is certainly fitting that First Samurai in New York premieres at the Artemis “Women in Action” Film Festival, which celebrates female action and empowerment.

The Screening times are:

The location is the Laemmle Monica Film Center (1332 2nd St Santa Monica, California 90401). Tickets can be purchased at laemmle.com. After the premiere weekend, the plan is to take the film on the road and if you are interested in keeping an eye on its movements, you can follow the film on its Facebook page, where you can also learn more about its talented cast and crew.

If First Samurai in New York is anything like The 8th Samurai, the future should look bright for the now 37-year-old Ambrosino and his creative team. The director had originally hoped to find a festival screening or two for his short film, but it ended up touring the world and over 40 film festivals, winning numerous jury awards, including the “Best of Fest” at the LA Shorts Fest.

So, if you find yourself in LA this coming weekend, cancel all your plans, check out First Samurai in New York (and maybe some other shorts while you are there) and then report back to us in the comments section below!