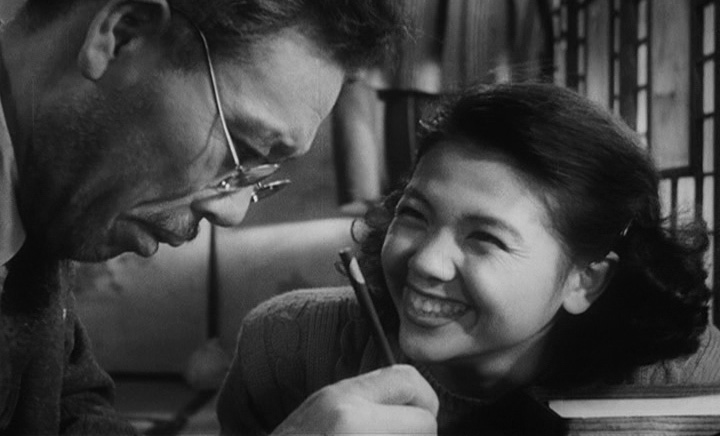 It was exactly 85 years ago, on June 29 1930, that actress Miki Odagiri (1930-2006) was born. Best known for her role in Akira Kurosawa‘s Ikiru (1952), Odagiri appeared in around 25 films and numerous television dramas during a film career which lasted for over thirty years.

Although she had appeared in Satsuo Yamamoto‘s Pastoral Symphony (1938) at the age of eight, Ikiru was Odagiri’s first real time as an actress. The 22-year-old theatre student wasn’t actually seriously seeking a film role when she auditioned for Ikiru, being there mainly to accompany a friend who was auditioning for another role. But Odagiri’s natural performance pleased Kurosawa, who ended up hiring her for the major role of Toyo, the young co-worker whose enthusiasm and love of life spark a transformation in the dying bureaucrat protagonist played by Takashi Shimura.

The film also gave the actress a new name. Born as Miki Santō, she had earlier gone by the name Kimiko Fujiyama, but now began to use the family name of her character in Ikiru, Toyo Odagiri. After her marriage to actor Shōji Yasui (The Burmese Harp, Kokoro, The Human Condition), she took on her husband’s legal family name, becoming Miki Yomo, although she continued to use Miki Odagiri as her actress name.

Ikiru was the only Kurosawa film in which Odagiri appeared and her later films are far less known. The bulk of her big screen career was in fact fairly short as it took place between 1952 and 1958, after which she appeared almost solely in television dramas.

She is wonderful in Ikiru – its a really funny, very natural performance which I think very effectively gets to the essence of why Watanabe is so drawn to her. Its interesting that despite how busy she seems to have been in the few years after Ikiru, she never seems to have had many major roles. Perhaps simply because she wasn’t conventionally good looking? It is odd though that Kurosawa never used her again, but I suppose this could have been down to contractual or career reasons.

Contractual details may well have been one reason that she never appeared in another Kurosawa film. According to the Japanese Movie Database, only her first and last film were for Toho, with the bulk of her film career spent at Nikkatsu, and then at television productions. It’s not a full filmography though, as it seems to miss her later television work entirely (see her Japanese Wikipedia page, which in turn misses a lot of her film work).

I was thinking about the actresses that Kurosawa employed in major roles across multiple films (e.g. Kyōko Kagawa, Isuzu Yamada, Chieko Nakakita) as opposed to equally wonderful actresses that he used only once or twice (e.g. Setsuko Hara, Yoshiko Yamaguchi, Miki Odagiri). While I wouldn’t start ranking the acting abilities of these wonderful talents, I wonder if a case could be made that those in the former group tended to give more diverse performances across their careers than those in the latter group, who were more like presences, typically playing a certain type from film to film.

If so, it is interesting that at the same time Kurosawa’s leading men tended to be more of the latter type. Mifune is (almost) always Mifune, Shimura is Shimura, Susumu Fujita was pretty much always Susumu Fujita.

It’s not a hard cut division, of course, and there are many counter examples. Machiko Kyō only appeared in Rashomon, but has had a wonderfully diverse (and long) career. Meanwhile, Masayuki Mori was something of a leading man for Kurosawa for a period of time and also a very diverse actor, as witnessed for instance in his transformation from Rashomon to The Idiot, and then again in his appearance for Mizoguchi in Ugetsu a couple of years later.

Vili, I think you make a very good point that Kurosawa seemed to have a preference for actors with ‘presence’ as opposed to versatile technical actors. Its interesting to compare this to Ozu, who I believe also had a dislike of technical actors, but for an entirely different reason – from what I have read, Ozu thought formally educated actors were too mannered, he preferred actors he could mould into the part.

I think Kurosawa may simply have preferred larger than life personalities who could give something extra to the part, especially for lead roles. Perhaps its significant that the actors who come to mind as being consummate professionals, such as Kagawa and Yamada, were in ‘secondary’ roles in the films, not leading roles.