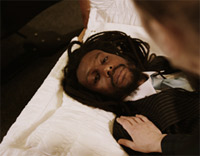 October 4 will see the world premiere of a new short film produced by Kurosawa Production and titled The Hound of Heaven. The film, directed by N.D. Wilson will be shown as part of this year’s Raindance Film Festival.

The Hound of Heaven is based on English poet Francis Thompson‘s 182 line poem of the same name about a girl believes that she is fleeing death, when she is actually running away from her only chance at life. The film is executive produced by Akira Kurosawa’s son Hisao Kurosawa, the chairman of Kurosawa Production. It stars Jason Petty, better known by his stage name Propaganda, and debut actress Danielle Smith.

In the press release, Hisao Kurosawa describes The Hound of Heaven as “a striking film, simultaneously brimming with aggression and tenderness. And Nate excels in his craft as a director and storyteller with this vivid and imaginative piece of cinema.”

Meanwhie, N.D. Wilson is quoted as saying: “Honestly, I think I should be sick of the film by now, but I’m truly thrilled with Hound — even more so now that it’s being screened at Raindance. It still shocks me uniquely every time I watch it, and I couldn’t be any prouder of our team for what they were able to do. Of course, having to meet Kurosawa’s standards provided the right kind of inspirational pressure for all of us. It’s difficult to express how honoured and grateful I am to have worked with him on The Hound of Heaven, and I hope to benefit from his sharp eyes again someday soon.”

Tagged with hisao-kurosawa, kurosawa production, the hound of heaven