Quentin Tarantino’s next film may (also) have Kurosawa DNA 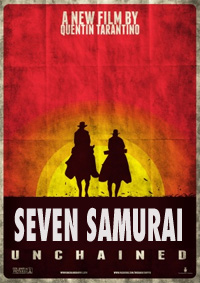 According to The Hollywood Reporter, Quentin Tarantino‘s next film will be a western titled The Hateful Eight.

The title appears to be reference to The Magnificent Seven, the John Sturges directed western remake of Akira Kurosawa’s Seven Samurai. No actual details of the plot or the cast have been confirmed, but rumours are that Tarantino is aiming to shoot the film this summer.

If The Hateful Eight materialises in the currently proposed form, it would be Tarantino’s second film in a row to continue a family of films started by Kurosawa. As we discussed at the time of its release, Tarantino’s previous film, Django Unchained can be counted as part of the family tree started by Kurosawa’s 1961 samurai film Yojimbo.

Update January 23: As Garen points out in the comments below, the script has leaked and as a result Tarantino has decided to shelve filming the project for now. Although he does contemplate publishing it. For more, see Empire.

I can’t express how excited I am by this! Despite its draggy last act, I loved Django Unchained. A Tarantino riff on Seven Samurai would be incredible.

Who did that poster?

I’m always curious about new Tarantino projects, even if I rarely actually end up praising the films.

The poster is a modified version of this one, which I assume is one of the official posters for Django. I just replaced the title.

Well, I guess that’s it for The Hateful Eight! http://www.empireonline.com/news/story.asp?NID=39882 – at least for now.

Oh well, thats a bit sad. He can be a little precious sometimes. I’m surprised he is surprised it leaked, any agent I would imagine (not being part of that world) would want to spread it among his or her clients.

Thanks for the link, Garen! Disappointing, indeed.

Ugetsu: I’m surprised he is surprised it leaked, any agent I would imagine (not being part of that world) would want to spread it among his or her clients.

Being part of that world, I would say that there are some unwritten rules and codes of conduct that one tries to follow. So much of the industry is built on trust.

The rest is built on a mountain of legal documents because no one really trusts anyone.

Anyway, it only takes one person mistakenly trusting someone else, and the cat is out of the bag.

Tarantino has now sued Gawker for copyright infringement for making the script publicly available. Whether or not one thinks Tarantino overreacted by deciding not to go forward with the movie (personally, I might lose the motivation to make a movie when the script becomes public knowledge), the negative response to the lawsuit is sad and pathetic.