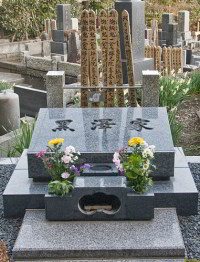 September 6th 2013 will mark 15 years since the death of Akira Kurosawa, and if you happen to be in Japan’s Kanagawa Prefecture, you can join a group of like minded people to commemorate the date.

More specifically, the Myohonji temple in Kamakura will host a memorial service and talks, with the guests including Kurosawa’s daughter, costumer designer Kazuko Kurosawa. Keeping it in the family, the talk will be moderated by Kazuko’s eldest son, actor Takayuki Kato.

The event appears to start at 2 pm with a Buddhist memorial service and a visit to Kurosawa’s grave, followed by a talk event starting at 5 pm. At 7 pm there apparently is also another discussion, titled approximately “Meeting to talk together about Akira Kurosawa”.

The attendance fee is 2500 yen, or 1000 yen for memorial service only, with reductions for students. Some of Kurosawa’s favourite refreshments, including inarizushi and espresso coffee, will be served.

Before planning your trip, make sure to check out the original Japanese news article, as my Japanese is on the level that there is a possibility that rather than a news item about a memorial service it may well be just a report about turnips instead.

If someone from this largely English speaking corner of the Kurosawa world happens to attend the Kurosawa memorial / turnip festival, it would be great to hear what happened!