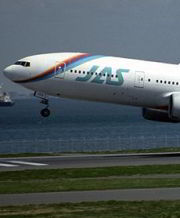 In the mid 1990s, Kurosawa was commissioned seven paint designs for MD90 airplanes belonging to what was back then Japan Air System (JAS). After JAS was merged into JAL in the early 2000s, the whole fleet was transferred to the new owner and the Kurosawa designs were also sadly painted over to reflect JAL’s own colours and logo. Now the repainted airplanes themselves have been retired.

Some of Kurosawa’s original designs can be seen here. There is also a towel.