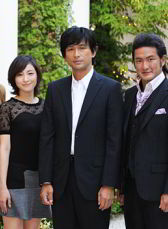 The Japanese TV channel TV Asahi will be celebrating its 55 years of broadcasting by showing a brand new TV remake of Kurosawa’s 1949 film Stray Dog. The new remake will be shown on the channel on January 19, 2013.

The film is directed by the primarily television director Yasuo Tsuruhashi and stars Yoosuke Eguchi as detective Murakami (Toshiro Mifune in the original version) and Ryooko Hirosuke as Yusa.

Stray Dog is not the first recent Kurosawa remake produced by TV Asahi. In 2007, the channel broadcast remakes of Ikiru and High and Low, the latter of which was also directed by the Stray Dog director Yasuo Tsuruhashi. As with their previous Kurosawa remakes, TV Asahi’s Stray Dog appears to be modernised and fairly substantially altered from the original.

More information is available in Japanese over at the TV Asahi website.

Just a reminder that this TV remake will be airing tomorrow. If you are interested in watching it, send me an email, as I may have found a way to watch the channel online.

can i still get to watch this ?

I don’t know if they are planning to show it again, but at least some of the TV Asahi films have later been released on DVD and/or blu-ray. I guess that’s our best bet for now.

arigatou . i was recommended by a friend ,but i dont get this channel ,thats why was unable to watch it. have been trying to watch online for some time now 🙁

Tensai, Good luck trying to get a copy, I’d be very interested too, to see how it turns out. Its interesting how sometimes even shot by shot remakes can be so poor – it does show that the ‘greats’, whether directors or actors, had a certain indefinable magic that just can’t always be copied.

A bit of a rant here, but I thought the great digital revolution was supposed to extend ‘the long tail’ so that lots of old films and books would be easily available for streaming or downloading. Yet it seems as tough as ever to get even semi-obscure films, and lots of great books which have been out of print for just a few years are very difficult to track down, especially if you have an aversion to making Amazon even richer.

thank you Ugetsu san ,im going to remain optimistic. truth is im a big fan of the actors ,i was unlucky to have missed it. im sure the remake is good too (though im not a big fan of remakes) , this one i especially would like to see. hopefully ill give it some time and wait 🙂

Let’s hope that they’ll release it. I didn’t actually get to see the film either, as the website that I found crashed about 5 minutes into the broadcast. I guess I wasn’t the only one who wanted to see the Kurosawa remake!

definately 😀 .im happy to know im not the only one too . i will let you know as soon as i find something .