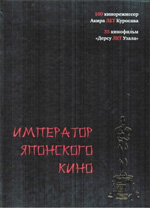 Some of you may remember a news post I wrote a while back about Vladimir Vasilyev, assistant director for Kurosawa during the production of Dersu Uzala, looking for a publisher for his new book on the making of the film. I now have good news: the book was published in Russia this spring!

The 160 page book is titled Император японского кино (or Emperor of Japanese Cinema), and includes material from Vasilyev and Yuri Solomin, the actor who played captain Vladimir Arseniev. The book is illustrated with previously unseen photos from the personal archives of Solomin and Vasilyev.

You can watch a news video that coincided with the publication here. Unfortunately, I have not been able to find an online store that would sell the book and ship internationally. Can you? Although the book is in Russian and I don’t really speak the language, the book interests me quite a bit.

Finally, on a somewhat related but still totally unconnected note, I can also reveal that I was recently contacted by some documentary film makers who have made an hour-long documentary on the making of Dersu Uzala, and are currently looking for a way to release it. Having seen the documentary, which includes plenty of new information and loads of brand new interviews with the Russian crew, I must say that it would be a crime against all things nice if the work did not get a release. So, if you happen to know an outlet for a Dersu Uzala documentary looking for release, let me know!

Update: OZON.ru and biblio-glob.us now seem to stock the book. Both also ship internationally. (I haven’t actually used either yet, so I cannot comment on how it works.)

I was just pointed to a couple of Russian online bookstores by a friend: OZON.ru and biblio-glob.us both stock the book and also ship internationally. I don’t know how well they work though as I haven’t ordered yet.

I should have looked here first – I just asked an LJ friend of mine who lives in Russia, who passed along some manga recs, to check out online book retailers who ship internationally.

I’m going to try to link you to bakaupdates (a site with information on various manga) and some people have linked to images from their recs when I respond to your e-mail. I hope to do that today, but don’t hold me to it.