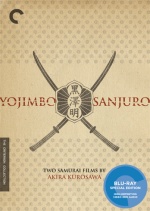 So, today on March 23, it is exactly one hundred years since the birth of Akira Kurosawa. Criterion has fittingly decided to celebrate this with two new Region A Blu-ray releases by bringing out high-definition releases of Yojimbo and Sanjuro. (They had originally planned to put out Seven Samurai, but couldn’t finish the restoration in time.) Here is how they have turned out, based on a scan of online reviews.

In short: Video and audio quality has apparently improved for both films since their last DVD release by Criterion, while the extras are exactly the same as with the DVD release. Yojimbo has been especially enhanced by the move to Blu-ray.

DVD Beaver on Yojimbo Blu-ray: “The improvement can seem subtle at times and dramatic at others. … The final result of the move to Blu-ray are highly impressive visuals more fully respecting the theatrical appearance. This no longer looks video-y”.

DVD Beaver on Sanjuro Blu-ray: “The final result of the move to Blu-ray supports the visuals to a more pronounced degree appearing much more film-like but it still looks cropped beside the BFI (and Madmen).”

DVD Talk on Yojimbo Blu-ray: “Seeing how much this film has escalated in quality is quite an impressive comparison, both for the restoration efforts and for the technology in itself. … Though the most recent DVD is impressive in its own right, this Blu-ray takes the film’s visual demeanor to another, far more natural level.” The reviewer also praises Yojimbo’s newly-remastered DTS HD Master Audio 3.0 Perspecta track (don’t ask me), which is presented as an alternative option to the original uncompressed monaural track. Video 4.5/5, Audio 4.5/5.

DVD Talk on Sanjuro Blu-ray: “The black and white image is incredibly crisp and shows far more detail than was present on the previous standard definition releases that Criterion has released over the years.” Again, the reviewer praises the alternative HD soundtrack. Video 4/5, Audio 4/5.

DVD Verdict on Yojimbo Blu-ray: “Kurosawa’s fine attention to detail pays off with a transfer that presents daytime scenes as clear, bright, and pristine. I couldn’t imagine a fifty-year-old film with a limited budget could ever look this good.” Thumbs up also for the sound. Video 99/100, Audio 94/100.

DVD Verdict on Sanjuro Blu-ray: “Criterion has done a fine job with the Blu-ray presentation, but owners of the 2007 remastered release may be well served to stick with what they have, unless the slight visual bump appeals to you.” Again, thumbs up for the sound. Video 90/100, Audio 72/100.

DVD Town on Yojimbo Blu-ray: “The Blu-Ray is, as expected, a step-up from the 2007 digitally restored SD release though it is not quite as significant an improvement as some of Criterion´s best Blu-Rays (like ‘Days of Heaven’ and ‘Last Year at Marienbad.’)” Video 9/10, Audio 8/10.

DVD Town on Sanjuro Blu-ray: “In the 2007 re-release of both titles, the restored SD transfer for ‘Sanjuro’ was just a shade below that of ‘Yojimbo’ and the same holds true for the Blu-Ray”. Video 8/10, Audio 8/10.

Blu-ray.com on Yojimbo Blu-ray: “aside from some very mild flickering that I noticed during a couple of scenes, everything else looks superb. … this Blu-ray release of Akira Kurosawa’s Yojimbo represents a dramatic upgrade over its SDVD counterpart”. Video 5/5, Audio 4.5/5.

Blu-ray.com on Sanjuro Blu-ray: “Even though the transition to 1080p here is not as striking as it is with Yojimbo, the final result is still pleasing.” Video 4/5, Audio 4.5/5.

For more in formation about the availability of these films on Blu-ray, see the page on Akira Kurosawa Blu-rays.

Got them on order but won’t be able to watch them until I manage to find a region free Blu-ray player. So they will have to wait on the shelf along with my Criterion Kagemusha and Traffic Blu-ray discs until then.

In the meantime I have downloaded a 7GB 1080p rip of Sanjuro and it does look stunning and very crisp. There is an 11GB 1080p rip of Yojimbo which I may have by tomorrow with a bit of high speed connection overnight. Given that all the Criterion Blu-ray’s are Region A, I think this is the only option for those of us in other regions.

Does anyone here actually have good recommendations for Blu-ray players whose region coding can be hacked?

People usually recommend PlayStation 3 as a player, but as far as I know the region coding on it cannot be unlocked, not even for the DVD part of the drive. I’d like to buy a Blu-ray player, but considering that most of the HD discs that I would buy would be from the US, I see no point in buying a player that cannot play discs from all regions.

I’ve mentioned the company Oppo in the past, a great company with good prices, and one of the few they use some of the most expensive decoders out there, without the most expensive cost for the unit(i.e. Denon). Oppo DVD players, and Blu-Ray players “accidentally” leave access to the diagnostics and manufacture configurations menus(after firmware change), thus allowing multi-region change. The players too can do NTSC to PAL conversions, for those running interlaced and 576, but you should all have 1080p @24fps TVs anyways, right. 😉

They are worth a look, but I doubt you’ll find them outside America, so you’ll first have to find a place that will ship them to you, but that shouldn’t be too hard.

Thanks for the tip, Jeremy! As a brand, Oppo says absolutely nothing to me, although you may well have mentioned it in the past.

A quick search indicates that there are plenty of Oppos on eBay with free worldwide shipping, but the prices aren’t too tempting — around twice the price compared to what’s listed at oppodigital.com. There are a few cheap units, but they are all marked as being shipped from Hong Kong…

I’ll keep my eyes open, though.

Might be wise to avoid the cheap prices on Ebay, I have nothing that would suggest it being the case, but Oppo has become somewhat popular in the A/V crowd, and I wouldn’t be surprised a few counterfeits exist, using cheap decoders inside, it’s easy to get a hold of the cases, they are made in China after all, and internally minus the well respected decoders, most players are laid out similarly enough to be fitted inside any other case you want.
Nevertheless if you ever do jump on Blu-Ray, I would suggest an attempt at Oppo’s stuff, if you can find a legit dealer.

On eBay, I pretty much stay away from anything that’s marked as shipped from Hong Kong and China. I’ve had bad experiences before, and the local customs are also far more strict with goods shipped from China than with those from, say, the US. The latter rarely get picked up for import taxes even when they should, while packages from China tend to be treated as if they would all contain the Ebola virus or something.

Anyway, I still need that 1080p TV, as mine only does 1080i and even then only on the paper, as in reality it is not capable of pulling off anything beyond 480p when connected to any device known to man.