New Kurosawa Book: Censorship of Japanese Films During the U.S. Occupation of Japan 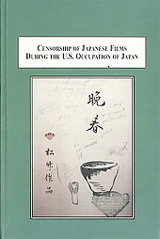 The publication date for Lars-Martin Sorensen‘s new book Censorship of Japanese Films During the U.S. Occupation of Japan: The Cases of Yasujiro Ozu and Akira Kurosawa was supposed to be October 30, but Amazon.com and Amazon.co.uk already list the book as “in stock”, although the former only has one copy left, and the latter notes a 10-13 day dispatch window.

As the title indicates, the book investigates how Japanese cinema was affected by and dealt with film censorship during the post-war American occupation of Japan (1945-1952). More specifically, the author concentrates on the cases of Yasujiro Ozu and Akira Kurosawa. The product description reads:

As a consequence, the analysis of resistance in the occupation films of Ozu and Kurosawa is virtually nonexistent. Since meaning is made by movie-goers, I present a general outline of the interpretive framework peculiar to Japanese audiences during the occupation in chapter two. Subsequently, the history, structure and daily practice of U.S. censorship is described.

The analysis of films, film criticism, and censorship documents on Ozu’s and Kurosawa’s films show that both directors repeatedly probed the limits of censorship, at times dodged censorship and frequently managed to denounce the occupiers and their imposed modernization. Ozu’s resistance was especially concerned with the status of women in contemporary Japanese society. Kurosawa continued to foreground many of the nationalist themes of his wartime propaganda films in his occupation films, and tended to dress his criminal characters up as westerners with the presumable intent to denounce both the occupiers and those Japanese who embraced the ways of the occupiers.

Finally, the book argues that Kurosawa’s international breakthrough, “Rashomon” (1950), lends itself to an interpretation bordering on anti-Americanism by the contemporary Japanese audience.

Based on the description above, I am certain that the book will generate some discussion here! As I have not yet received my copy, I cannot comment further.

Lars-Martin Sorensen (actually “Sørensen”, but I’ll go with the publisher’s version) is a postdoc research fellow at the Section of Film & Media Studies, University of Copenhagen. According to the author blurb, he has published numerous articles on Japanese film, is a co-editor of the peer reviewed film journal Kosmorama, and a member of the steering committee of the Nordic Association for the Study of Contemporary Japan (NAJS). Meanwhile, the book’s foreword is written by none other than Stephen Prince.

For more information about the book, see the section on Akira Kurosawa books.