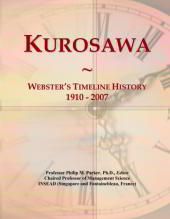 Having now had a week with Webster’s Timeline History, my verdict is that this is indeed just about the most useless book that I have ever had the displeasure of opening.

Basically, what we have here is an automatically generated list of entries containing the keyword “Kurosawa”. These are copy-pasted from Wikipedia, WordNet and some other unnamed sources. To give you an idea what this means, here is a totally random entry from page 67:

And here is another one from page 100:

This is what the 232 page book is filled with, entry after entry, some ten of them on each page. I cannot for the life of me think what purpose this book might serve to anyone – except for the publisher, someone called Philip M. Parker, who is probably happy with my $22.

Furthermore, the title of the book is deliberately misleading. For one thing, it uses the non-trademarked name Webster, which probably leads many to think about Merriam Webster, the well-known publisher of reference materials that has absolutely nothing to do with this book. Secondly, the time frame “1910-2007” in the title is clearly chosen to make it look like this would be an Akira Kurosawa book. The first year coincides with Kurosawa’s birth, and that is the only reason that I can imagine for it being in the title – the earliest entry in the book is actually from the 13th century. The first 8 pages take us to the 1980s, leaving the remaining 220 pages to cover the last 28 years (the last entries are from 2008, not 2007).

Much would, of course, be forgiven if among its seemingly random selection of entries the book would contain something useful, like for instance publication dates for a good number of Kurosawa essays, in which case the book could function as a bibliography. Sadly, this is not the case, as all the Akira Kurosawa related entries that I could find had to do with release dates of his films, either on the big screen or home video, mixed with a few totally randomly selected book publication dates. And even these are neither comprehensive or verified, making the data completely unusable. The index is near useless as well, having also been automatically generated. And I don’t really see how this random mess of entries could serve any other field of research, either.

In short, Webster’s Timeline History is the closest to a publishing fraud that I have ever seen. There really can’t be any reason for anyone to get this book. I don’t think I’ve ever seen a similar waste of ink and paper in my life.

Wow, it looks appalling. My first thought on seeing the cover is that it is ‘Websters’, as in the dictionary. I’m surprised (if they aren’t) taking legal action of this, its clearly meant to deceive.

Ugetsu: I’m surprised (if they aren’t) taking legal action of this, its clearly meant to deceive.

The problem is that “Webster” is not a proprietary name, so they can’t do anything about it. You can find more information about the problem on the Merriam-Webster website.

Vili, I laughed out loud at reading the first entry. It’s just like the fourth page of a Google search! All that random stuff! Very funny. I am sorry, though, that you wasted money on it.

Speaking of wasted ink: my university now only issues CDs of university catalogues, finally phasing out the hard copies. They’ve had the online version for years, but htis is a really big step, I think. Hooray for saving trees. Boo for the waste you purchased. Sorry!

A faint sense of anger in the review; this is new; embraced the dark side Vili, embrace.

Thanks for your review of this work. I was recently asked to purchase another in the series for our library and I couldn’t find any information on the contents. I can now offer our user the opportunity to get another, useful book on their subject.

I’m so glad I read this first. I was about to purchase another in their Timeline series – now I shall not bother. What a nerve of some publishers”. It sounds like a load of rubbish.

Glad my review helped, Lisa! I don’t know what the other books in the series are like, but the Kurosawa one is pretty worthless, and I have heard the same said about the William Blake book.

I also came to your page wondering about whether it is worthwhile to buy one of their other Timeline History book. Thank you so much for your review, I will now not go ahead!!

Your 2nd para is fantastic, I LOL when I read “Having now had a week with Webster’s Timeline History, my verdict is that this is indeed just about the most useless book that I have ever had the displeasure of opening.” 😆

I believe lots of books these days are print on demand – I have bought several books from amazon in the past couple of years which are printed after I’d ordered, they are of laser printer quality (yes, if you fold a page the words will crack up and bits of the toner will fall off), plus there is also a print date and name of the printer on the final page of the book. I believe this technology has made it possible for publishers to create thousands of useless books just in case some punters go for it, they lose nothing and have all to gain. Shame on them!! >:-(

Alice, I’m really happy to hear that this review continues to be useful for people considering buying these books. I totally share your feelings about the subject.

As you say, more and more books these days are print on demand, and while it can certainly do a lot of good, many of these books are works that are automatically generated from public domain sources. This has become such a nuisance that I have almost given up searching for new books on Amazon in certain subjects. The signal to noise ratio has dropped so dramatically that I just don’t feel like it’s worth the time any more.

As an example, take for instance the “publication date” sorted search on Akira Kurosawa. 16 of the first 17 entries are automatically generated books from sources like Wikipedia.

It saddens me that someone might actually pay Books LLC $107.22 for one of these atrocities. And it definitely says something about the care that goes into these publications that the cover of the book in question has a printing error in Ozu’s name.

I was about to purchase another title of this series because its title is my last name, which is from very far away and I know just a little bit of it… But I saw you review… I cannot believe that the book would be an absolute piece of crap! Thank you for the review. I was browsing trying to find out what was it about. Regards. 😉