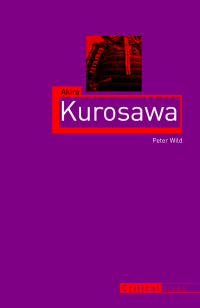 Peter Wild‘s Akira Kurosawa is the first new English language Kurosawa book to come out in two years, and the first serious attempt at a career-spanning biography and evaluation of Kurosawa’s films for quite a while. I am here to tell you how it fares.

Published as part of Reaktion Books’s Critical Lives series, Wild’s Akira Kurosawa is a compact, 208-page little paperback book that aims to serve as an introduction to the subject at hand. In its task the book succeeds beautifully. Wild proceeds through Kurosawa’s career chronologically, touching on all the major parts of his life and never lingering with any single film any longer than absolutely necessary. More space is understandably given for films like Rashomon and Seven Samurai, but by and large each film is afforded between three and ten pages.

In that limited space, Wild succeeds in narrating the essential by describing each film’s place in Kurosawa’s life and career, telling the most interesting anecdotes about the making of each film, giving a brief summary of each film’s contents, and also offering a review of the critical reception for each film, often briefly including his own take on the subject.

Akira Kurosawa is one of those books where every paragraph seems to have been very carefully thought out to conserve space and maximise information density. Yet, Wild’s text is also very accessible and readable, for which the author must be commended. The book includes 48 black and white illustrations, most of which are screenshots from Kurosawa’s films. Unfortunately, due to the small size of the book, the widescreen pictures have been forced into a fairly miniscule size. Another small disappointment is the lack of an index.

Peter Wild’s Akira Kurosawa is an excellent introduction to Kurosawa’s life and career, and I would not hesitate to suggest it to anyone new to the director. In fact, it may well be the best English language introduction currently out there, and with the upcoming season in mind, it could be a fairly good (and definitely affordable) Christmas gift for someone you know who might be interested in Kurosawa.

However, those who are already familiar with Kurosawa’s life and career will find the book less valuable. In the end, the volume contains relatively little truly original content and works primarily as a summary of what has been written before. But this, of course, is exactly its purpose.

Peter Wild’s Akira Kurosawa is now available in bookshops around the world, including Amazon.com and Amazon.co.uk.

Looks interesting Vili, thanks for the review.