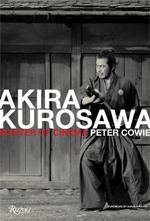 First of all, Dolores Martinez‘s Remaking Kurosawa has now been out for a month or so in the US, but I have yet to see a single review. Has anyone here had the chance to read the book, and would you be willing to share what you thought about it?

The UK release, which was supposed to take place a couple of weeks ago, is apparently only happening a few months from now. Confusion surrounds the whole thing, and since I have my copy on pre-order from the UK, I still haven’t had the chance to read the book. (No review copies sent my way either, bummer.)

Secondly, there is a new Kurosawa book coming out next year. British film historian Peter Cowie‘s Akira Kurosawa: Master of Cinema (pictured above) is currently scheduled for March 9, 2010 publication. Cowie is known for his works on Ingmar Bergman, Francis Ford Coppola and John Ford, among others, so I think we should expect something quite interesting. I currently have only fairly few actual details about the book, other than its length (304 pages) and the fact that it contains a foreword by Donald Richie, and a preface by Kurosawa’s daughter Kazuko Kurosawa.

Speaking of Kazuko, when are they publishing a translation of her book Papa, Kurosawa? I have it in Japanese, but haven’t yet mustered the courage to try and read it, hoping that the might publish it next year to coincide with the centenary. Kazuko also seems to have some sort of a culinary Kurosawa book out whose title translates as Akira Kurosawa’s Dining Table.

Well, I’m interested in Martinez’s book, but it’s high US price without any real information as to what it’s about, and too a wrong Amazon description, sort of holds me back.

I’ll look for at the book store, and give a quick browse this weekend.

I would offer to translate Papa Kurosawa, but I couldn’t manage to read though the children book “minna no kao” successfully, so maybe it’s best we wait. 😛
http://www.yamaneko.org/mgzn/eng/jcb_j1205.htm#faces

Jeremy: Well, I’m interested in Martinez’s book, but it’s high US price without any real information as to what it’s about, and too a wrong Amazon description, sort of holds me back.

I’m personally quite curious what I will get once my order of Remaking Kurosawa: Youth, Schooling and Patriarchy in a Venezuelan Town arrives — if it ever does.

But it should be mentioned that you can find a real abstract and a table of contents here.

On the page you linked to, I like the look on that dog’s face on the cover of Who’s Behind Me? (the Japanese version is actually better). The hippo isn’t bad, either. Maybe I should put my order in.

You mean to tell me Kurosawa didn’t live in Venezuela? 🙄

The 3 major book stores in the US, all show Martinez’s book will not be store stock anywhere, and will be online order or special order only. So, without a chance to give a look, I have no plans to pick it up, and await your review Vili.

The description from Borders does sound interesting however:-Through the lens of Akira Kurosawa’s films, Martinez dissects the human tendency to make connections in a pioneering attempt to build a bridge out of diverse materials: the anthropology of Japan, film studies, and postmodern theory.

The dog to me, looks like he has good reason to be worried, I would suggest he kept his tail tucked tightly between his legs. 😯

I wonder if Kurosawa, as an communist and a long-time critic of capitalism (see also this month’s film club feature), is actually on Hugo Chávez’s new reading list. 😛

Meanwhile, there is still no sign that it will be on my own reading list any time soon, unless I order from the US. I guess I’ll actually have to accept that Amazon UK is not going to send the book to me any time soon, so I might just as well do my bit in helping the US economy.

I wonder if Kurosawa, as an communist and a long-time critic of capitalism (see also this month’s film club feature), is actually on Hugo Chávez’s new reading list. 😛

I might just as well do my bit in helping the US economy.

You still owe the US for we what it put into the IMF after-all.

Jeremy: You still owe the US for we what it put into the IMF after-all.

That’s a good sales pitch, I’m sold! So, here you go then, the results of my modern day Marshall Plan:

We thought you’d like to know that we shipped your items, and that this completes your order. Your order is being shipped and cannot be changed by you or by our customer service department.

You can track the status of this order, and all your orders, online by visiting Your Account at http://www.amazon.com/gp/css/history/view.html

Reversal-Marshal plan? What an age we live in.

Obama clearly hasn’t realised how simple it is to kick start US economy. Just offer enough new and expensive Kurosawa material, and I will eventually end up buying it all.