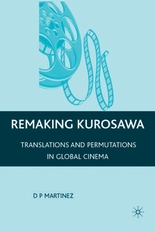 Remaking Kurosawa: Translations and Permutations in Global Cinema is the title of a forthcoming Akira Kurosawa book written by Dr Dolores Martinez from the University of London School of Oriental and African Studies.

The publication date is set for May 26, and although some online sources list a June publication, I have been informed by the author herself that the book should be out in May.

As the title and the abstract below suggest, Martinez’s work looks primarily at the influence that Kurosawa’s works have had on other film makers. Although Kurosawa’s influence is something that most film critics have been quick to note, there is actually relatively little in-depth discussion about the topic, and therefore Remaking Kurosawa looks like a very welcome addition to the list of Akira Kurosawa books available to the English readership.

Japan, so often called a nation of copiers, is also copied from and an example of this is the way that Akira Kurosawa’s films have influenced non-Japanese directors. Beginning with Rashomon (1950), the film that brought Kurosawa to western attention, this book also considers Seven Samurai (1954), Yojimbo (1961) and Hidden Fortress (1958). Through these films, the human tendency to make connections, see similarity, and then assert difference is described. A bold attempt to build a bridge out of diverse materials: the anthropology of Japan, film studies, and post-modern theory, this book traces the desire lines of the human imagination.

Personally, I am very interested in the suggested scope of the work as laid out in the last sentence of the abstract above.

Martinez’s previous publications include a chapter on Seven Samurai in Japanese Cinema: Texts and Contexts. She has also written on Rashomon (“Where the Hearts Goes Astray”, published in Film, the journal of Manchester University press) and is currently working on a paper about The Hidden Fortress, to be presented at the SMCS conference in Tokyo this May. According to Martinez, the paper will look at Kurosawa’s relationship with Eisenstein, and at Star Wars and the Last Princess, the latter of which was out too late to be included in Remaking Kurosawa.

There seems to be confusion in the other big American bookstores as well, not only are the descriptions unrelated, but the credited author is different, despite the book cover appearing as shown here.
Also the paperback version cost $74, compared to the hardback costing $64, to which both prices are ridiculous, considering the British price is roughly $16

Hopefully, the information gets fixed soon.

Never-the-less, I will be picking this book up for sure.

the paper will look at Kurosawa’s relationship with Eisenstein

In terms of his work yes. But not personally, as far as I know. I guess I could have worded that more clearly!

Great, another book to spend my money on. 🙂 I look forward to this one, it sounds very interesting.

Jeremy, once the $16 price point is arranged statestide, I’m buying!

I’ll keep an eye on this, and will be sure to let you know if the price is reduced. I dont know anything about import fees, but I have never seen a foreign book that cost more in America then elsewhere, so I hope it’s merely a mistake.

Actually, academic books that only get a limited print in a fairly limited market often cost an arm and a leg elsewhere.

This would of course assume that for some reason Palgrave doesn’t intend to publish the book in the US, and I don’t really see why they wouldn’t. But we’ll wait and see.

Just an update on this, while I am waiting for confirmation from the publisher regarding whether the book is actually out or not (the announced publication date was yesterday):

My guess is that the US publication date was yesterday, and the UK print will be out a month from now. The suggested retail price is probably the one given in Amazon.com, and the Amazon.co.uk price is either a mistake (in which case you may want to take advantage of it — I think Amazon guarantees their pre-order prices), or it is for a soft cover print (the ISBN is the same for both the UK and the US publication, however, so I guess not).

I’ll drop a proper news update once I find out what’s going on.