12 Academy Nominations for ‘Kabei: Our Mother’ 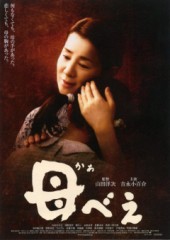 Kabei: Our Mother, which is based on Teruyo Nogami’s wartime memoirs, has received 12 nominations for the Japan Academy Awards, including Picture of the Year, Screenplay of the Year and Director of the Year. With its 12 nominations, Kabei is the second most nominated film of the year, after the 13 nominations gathered by Yojiro Takita’s Departures.

Those unsure why this is Kurosawa news may need to be reminded that Nogami was Kurosawa’s script supervisor and a close aide from the late 1940s all the way until the director’s death. A few years back, she also published a book on her experiences with Kurosawa, titled Waiting on the Weather: Making Movies with Akira Kurosawa. More information about the book can be found from the books section of this website.

It is perhaps also worth noting that neither this year’s The Last Princess (a remake of The Hidden Fortress) or late last year’s Tsubaki Sanjuro (a remake of Sanjuro) received any nominations.

The Japanese academy will announce its winners on February 22. A full list of this year’s nominees can be found in Japanese on the Japan Academy Prize website.