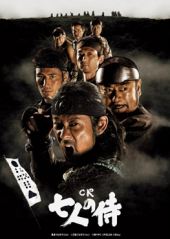 It seems that, somewhat out of the blue, a new Seven Samurai remake has been released in Japan. The film was directed by Hiroyuki Nakano (Samurai Fiction), and stars an ensemble of big name Japanese actors.

A few familiar names crop up in the personnel listing. Emi Wada, who worked with Kurosawa on Dreams and Ran, has apparently been in charge of the costumes, while cinematographer Masaharu Ueda (Kagemusha, Ran, Dreams, Rhapsody in August, Madadayo) worked with the camera.

Now, where it all gets rather weird is when you consider the format in which the film is delivered: apparently, the only way to catch the movie is with one of those Pachinko machines in Japan. Don’t ask.

I really don’t know what to make of this, but here is the official website. It has a number of clips from the film, too, but at least in my case they only crashed my browser.

Oh yes, and the soundtrack, by the way, is composed of Rolling Stones tunes.

Really, make of this what you want. While figuring it all out, do check also ryugangi and Twitch that report on the remake.

Perhaps our insider in the business, Investor in Japan, might be able to tell us more? In fact, I think that his recent comment at the AK100 thread actually even referred to this.

Leave it to the Japanese to do something like this. It is so weird it doesn’t seem real. I got some of the clips to “kinda” play. They stuttered. It looks pretty goofy and has stolen some shots from the original outright.

I’m still trying to get my head around this. It’s not first of April in Japan, is it? I mean, even when taking into account the different time zones and everything?