The Men Who Tread on the Tiger’s Tail 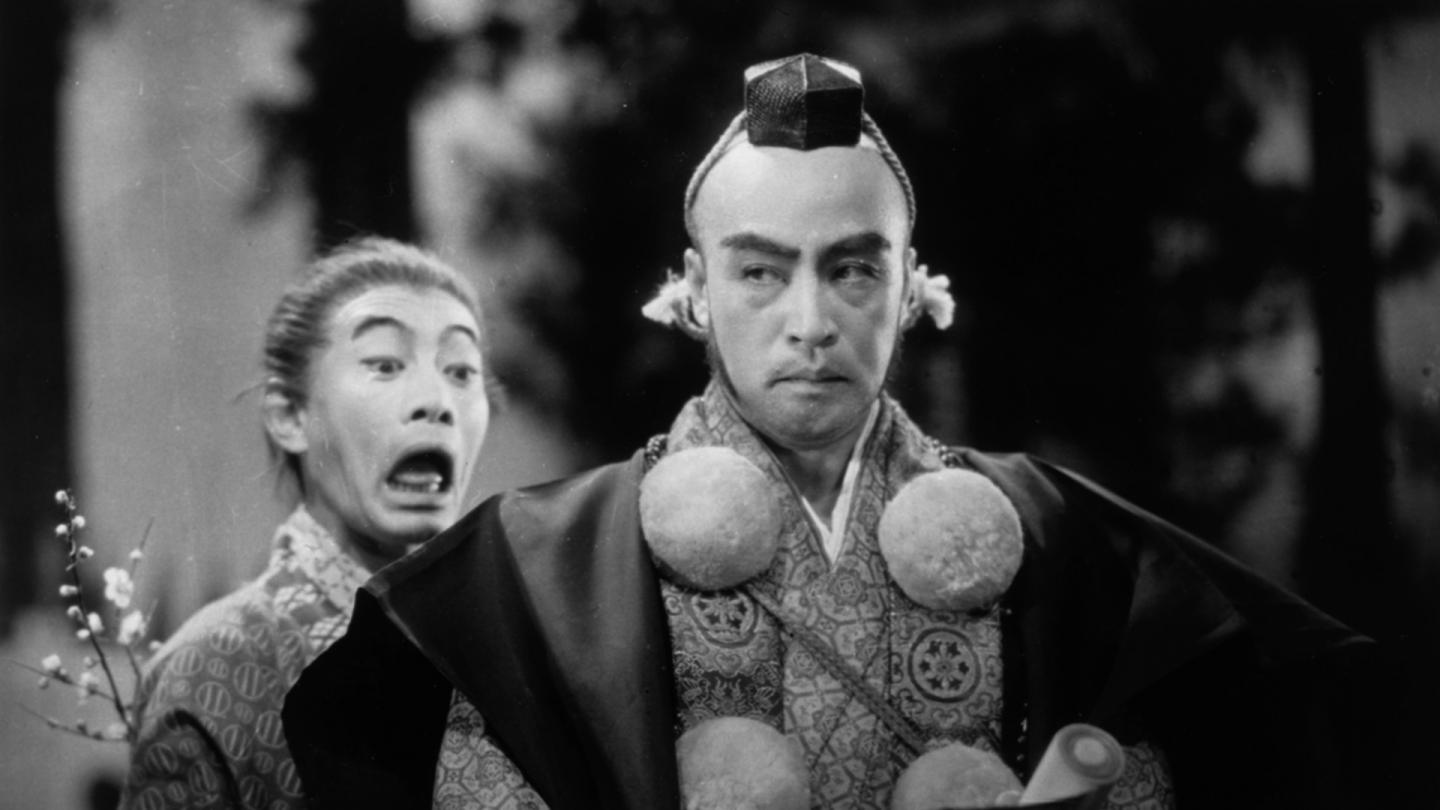 The Men Who Tread on the Tiger’s Tail is Akira Kurosawa’s fourth film. He directed it in 1945 but the film was released only years later in 1952 due to censorship restrictions. The film, which in English also goes by titles like They Who Step on the Tiger’s Tail, follows the historical military commander Yoshitsune Minamoto’s (1159-1189) escape after being betrayed by his brother. Minamoto and his group disguise as travelling monks and attempt to cross the border.

The Men Who Tread on the Tiger’s Tail is Kurosawa’s rendering of a well known Kabuki play Kanjincho, which in turn was based on a Noh play called Ataka. The plays are based on an actual historical incident from the late 12th century when Yoshitsune Minamoto had fought on his brother Yoritomo Minamoto‘s side in a campaign that would ultimately allow the latter to claim the title of Shogun and establish the Kamakura Shogunate. Yoritomo was, however, suspecting his brother of plotting against him (which he historically may well have been doing), and ordered Yoshitsune to be captured. Yoshitsune, together with his closest aides, was therefore forced to flee through Yorimoto-controlled territory and across a heavily guarded border in search of safety. While they managed to do so, and this is where the plays and the film ends, Yoshitsune was soon after hunted down by Yorimoto’s men and brought into a battle which ended with Yoshitsune committing suicide.

Before starting work on The Men Who Tread on the Tiger’s Tail, Kurosawa had been working on a film project called Lifted Spear, which much like his later film Kagemusha would have climaxed with a grand battle involving the 16th century warlord Nobunaga Oda. Unfortunately for Kurosawa, no horses were available for the crucial scene due to wartime shortages and the project was consequently abandoned. As a direct reaction to the fate of the Lifted Spear project, Kurosawa pitched the idea of The Men Who Tread on the Tiger’s Tail to his film studio Toho as a quick project that would require extremely modest resources, practically just a handful of actors, one set, and no horses.

The plans were approved by Toho and quickly passed initial wartime censorship, allowing Kurosawa to begin filming in early autumn 1945.

For the main role of Yoshitsune, Kurosawa cast veteran actor Denjiro Okochi who had already appeared in the two Sanshiro Sugata films. The actor who had played the titular role of Sugata in those two films, Susumu Fujita, also returned, but reversing the use of his actor, Kurosawa now cast Fujita as Togashi, Yoshitsune’s main opponent and the obstacle in the story. Richie considers Togashi “one of [Kurosawa’s] most interesting, and most enigmatic film characters”, partly because of the question whether Togashi knows the true identity of the travellers treading the tiger’s tail (to which Richie would answer “yes”). (Richie, 32-33)

Enomoto Kenichi, one of Japan’s most popular comedians of the time and commonly known as “Enoken”, was cast in the lively comic role of a porter, which stands as a stark contrast to the other characters in the film. His character is an interloper who does not really belong to the group, or for that matter even to the universe which they inhibit. Indeed, the character does not appear in the source plays or the historical anecdote, and as Prince has pointed out, even Kurosawa’s camera treats the porter somewhat differently from the other characters, especially Yoshitsune, whose framing in turn “enforces a distanced perspective by inhibiting direct access to the character”. (Prince, 60) In Richie’s view, Enoken here represents the “ordinary neurotic Japanese who over-reacts to everything – including the war” (Richie, 34) and can therefore be interpreted as representing the audience, with Desser continuing that Enoken “becomes the object with whom we identify so that the immediacy of the feudal era is removed”, allowing the audience to examine the era “from a modernistic perspective”. (Desser, 64-65) This is a character type which Kurosawa would arguably later employ also in Rashomon (the commoner played by Kichiro Ueda), Seven Samurai (Toshiro Mifune’s Kikuchiyo) and, in a somewhat more complicated manner, Kagemusha (the body double played by Tatsuya Nakadai).

Although this was the first and only time Kurosawa included Enoken in his own works, the director was already very familiar with the actor, who had starred in eight of the films on which Kurosawa had worked as an assistant director under his mentor Kajiro Yamamoto. In an interview in 1972, Kurosawa in fact suggested that the actor may not have been the only thing that he borrowed from Yamamoto while making The Men Who Tread on the Tiger’s Tail: “I used the essence of Yamamoto’s artistry that I absorbed while working under him to make Tiger’s Tail.” (Cardullo, 46)

Work on the film progressed relatively quickly, but even then it turned out to be too slow. Before the film was finished, the World War II had ended and Japan had surrendered to the Allied forces in September 1945. Kurosawa pushed on to complete the film, but with American occupation censors now in the process of taking over from their Japanese counterparts, it was doubtful whether the film would be released, considering its portrayal of feudal Japan, a subject considered taboo by the Americans.

In the end, the American censors perhaps never even saw the film. Kurosawa had earlier clashed with Japanese censors, who considered The Men Who Tread on the Tiger’s Tail a mockery of Japanese traditions. This was largely due to the comic overtones introduced into the classic story through the character of Enoken, although as Yoshimoto has noted, comic versions of kabuki classics were in fact nothing new, with the 1930s having been an especially popular period for straightforward parodies. (Yoshimoto, 98-99) Yet, either due to their dislike of The Men Who Tread on the Tiger’s Tail or Kurosawa, or both, the Japanese censors apparently on purpose neglected to list Kurosawa’s film among the works under production at the end of the war, and The Men Who Tread on the Tiger’s Tail was therefore seen as an illegal production by the American censors and automatically banned. The ban was lifted three years later in 1948, but the film would not be released until 1952, towards the end of the Occupation, possibly due to Toho worrying that the film’s content might still upset the occupiers. It would take eight more years for the film to make it to the West, with an American release in 1960. (Yoshimoto, 95; Sorensen, 191; Galbraith, 63)

The film’s relationship between its source material(s) is, like the Japanese censors had in their own way recognised, complicated. Richie sees The Men Who Tread on Tiger’s Tail as “a modernisation of Kabuki” and “stylistically interesting for the manner in which Kurosawa manages to retain those Noh ingredients still preserved in this ‘sterile flower’ of the Kabuki version” (Post Script, 9). Like its Kabuki source, the film is structured like a Noh play, using “a three-part construction, accelerating tempi given the category names of jo, ha and kyu, proceeding from slow to fast with, often, a short slow passage after the fastest.” (Post Script, 9) Furthermore, Richie points out that The Men Who Tread on Tiger’s Tail mixes Kabuki, Noh and even Western music, and he is also not alone in describing the film as almost a musical. Yet, these three music styles are in Richie’s view crucially kept quite separate, which Richie considers a sign that Kurosawa consciously recognised the multilayered nature and intertextuality of the film as a modern version of a Kabuki play based on a Noh play based on a historical incident. (Richie, 31) In Desser’s words, the film is also a “dialectic of old versus new, East versus West” and “[m]odern verus feudal” (Desser, 65).

Yoshimoto has also written quite extensively about the film’s background and relationship with Kabuki, Noh, and the era in which it was made. Yoshimoto, who argues that Kurosawa who preferred Noh saw Kabuki as artificial and essentially non-Japanese, suggests that “by adapting Kanjincho, Kurosawa tries to rectify Kabuki’s mistakes. He challenges Kabuki by changing parts of Kanjincho that interfere with the unity of the play.” (Yoshimoto, 108) Additionally, Yoshimoto points out that Kurosawa has also incorporated into his film elements from another popular Kabuki play, Chushingura (Yoshimoto, 110), which recounts the story of the forty-seven ronin and serves as the basis for many samurai films that Kurosawa may have by extension also subtly criticised through his own film. One of the films based on Chushingura is of course Kenji Mizoguchi’s 1941 film The 47 Ronin, which we watched a little over a month ago.

In addition to its complex textual references, The Men Who Tread on the Tiger’s Tail is also interesting in terms of its filming techniques. Richie suggests that “Kurosawa was probably never more conscious of his camera than in this film”, especially so in the sequence involving the blank scroll and the protagonists almost being found out where “in order to intensify the panic that all must be feeling, the need to escape, the improbability of doing so, Kurosawa resorts to probably the most extreme and experimental cutting of his entire career”. (Richie, 32) On the other hand, Prince sees much of the film as “what Hitchcock derisively termed picture of people talking”, and concludes that despite its textual richness, the films is in the end “very restrained” and visually “quite static”. (Prince, 62)

Ultimately, The Men Who Tread on the Tiger’s Tail is a fairly complex film with a surprisingly rich textual background for something that Kurosawa apparently more or less threw together as a project after the failure of Lifted Spear. To add to its intertextuality, the film may also have influenced Kurosawa’s later 1958 film The Hidden Fortress, which shares the motif of escaping through enemy lines and can also be seen as taking inspiration from The Men Who Tread on the Tiger’s Tail in the characterisation of the two peasants, who like Enoken’s porter are comic characters dropped into a social group that they in no way belong to. And although The Men Who Tread on the Tiger’s Tail was Kurosawa’s only adaptation of a classic Japanese play, the influence of traditional Japanese theatre, and Noh theatre in particular, can be seen in many of his works, most notably Throne of Blood and Ran.

They Who Stepon the Tiger’s Tail is available from BFI (UK) and Criterion (US) as part of their larger early Kurosawa box sets. They are equally good releases. If I absolutely had to choose between them, I would choose the Criterion due to its sharper and slightly brighter image. Having said that, the choice is not totally obvious, especially since the Eclipse is so sharp as to be quite grainy at times. Neither release comes with any extras.

Criterion’s print is available as part of the First Films of Akira Kurosawa (DVD region 1) box setm which can be ordered from Amazon.com and Amazon.ca.

Criterion’s print is also available as part of the AK 100 box set (DVD region 1), which is similarly available from Amazon.com and Amazon.ca. For more information about the set, see here.

The BFI Early Kurosawa box set (DVD region 2) contains BFI’s version and is available from Amazon.co.uk. You can find my review of the set here.

The Men Who Tread on the Tiger’s Tail