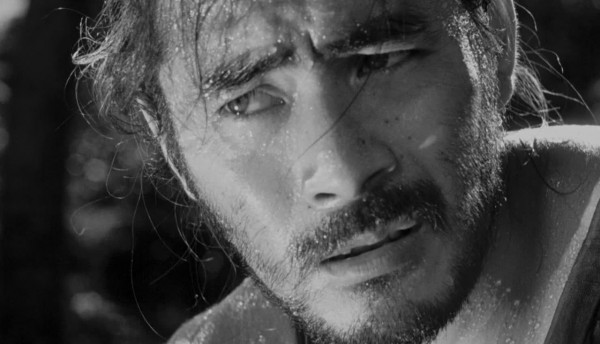 Exactly 95 years ago, on April 1, 1920, the Japanese actor Toshirō Mifune (1920-1997) was born in Qingdao, China. His parents were Christian missionaries working on the continent, and as a result Mifune spent his childhood in Japanese controlled China, growing up in Dalian and spending his formative years in Manchuria.

Today, Mifune is remembered as Japan’s most famous actor and his name and face are fundamentally associated with Akira Kurosawa. The two men worked together for two decades, producing a body a work which is typically considered among the greatest actor-director pairings in the history of cinema.

Yet, Mifune was not supposed to be an actor. His father owned a photography shop and the son was in fact looking to follow in his footsteps. Mifune served as an aerial photographer in World War II and later applied for a cameraman’s position at Toho Studios after the war. No such positions were available however, so in June 1946 Mifune ended up trying for the studio’s new faces programme, which was set up to attract new acting talent. Without any background in acting, Mifune’s audition didn’t go that well, but by chance he attracted Kurosawa’s interest. The young director spoke passionately on Mifune’s behalf and he was ultimately taken in. The rest, as they say, is history.

Mifune’s first appearance for Kurosawa was in Drunken Angel (1948), a film where he was supposed to play a supporting role next to Takashi Shimura but ended up hoarding much of the focus with his energetic performance. It was not the first time, however, that Mifune and Kurosawa were credited on the same film, for Mifune’s screen debut took place in the 1947 film Snow Trail that Kurosawa had written for Senkichi Taniguchi. During his career, Mifune appeared in seven other films that Kurosawa penned for other directors, in addition to starring in 16 films which Kurosawa directed. The two men also worked together on The Legacy of the 500,000 (1963), the only film directed by Mifune himself and for which Kurosawa agreed to do the editing.

The paths of the two men so suddenly and irrevocably diverged after Red Beard (1965). Why this happened has been subject to much speculation. Some have suggested that Mifune had grown unhappy with Red Beard‘s long shooting period which prevented him from taking other work and put his own production company into debt, while others have pointed to some parties having been unsatisfied with Mifune’s performance in the film and planted that seed of doubt also in Kurosawa. Kurosawa’s attempt to work with Hollywood after Red Beard must also have distanced the two men, and certain things were definitely said during Kurosawa’s failed Tora! Tora! Tora! production in the late 1960s which could have caused a rift, as Mifune was vocally unhappy that Kurosawa had decided to cast primarily amateur actors on such an important American financed film. Although the two men never worked together again and reportedly largely avoided each other’s company, towards the end of their careers each talked about their creative relationship in highly positive terms. In the end, Mifune and Kurosawa did reportedly reconcile their personal relationship in the early 1990s.

Although Kurosawa was instrumental in launching and nurturing Mifune’s career, the actor had a very successful career also outside of the director’s films, appearing in altogether close to 200 films. Early on in his career Mifune was typically cast in gangster roles, while later he crafted a successful and influential approach to samurai roles, highly influencing the genre in the process. Mifune was also in demand outside of Japan, appearing in numerous Hollywood films, including Steven Spielberg‘s 1941 (1979), John Frankenheimer‘s Grand Prix (1966), John Boorman‘s Hell in the Pacific (1968) and, perhaps most famously, the Shogun television series in 1980.

Mifune’s health began to deteriorate in the early 1990s, the cause of which has remained unknown to public. His condition worsened further when he was diagnosed with pancreatic cancer in 1995, and the by now already reclusive former actor disappeared from the public eye. Mifune died of multiple organ failure on Christmas eve, December 24, 1997, less than a year before Kurosawa passed away.

Today, Mifune would be 95 years old. How are you celebrating the great actor’s birthday? 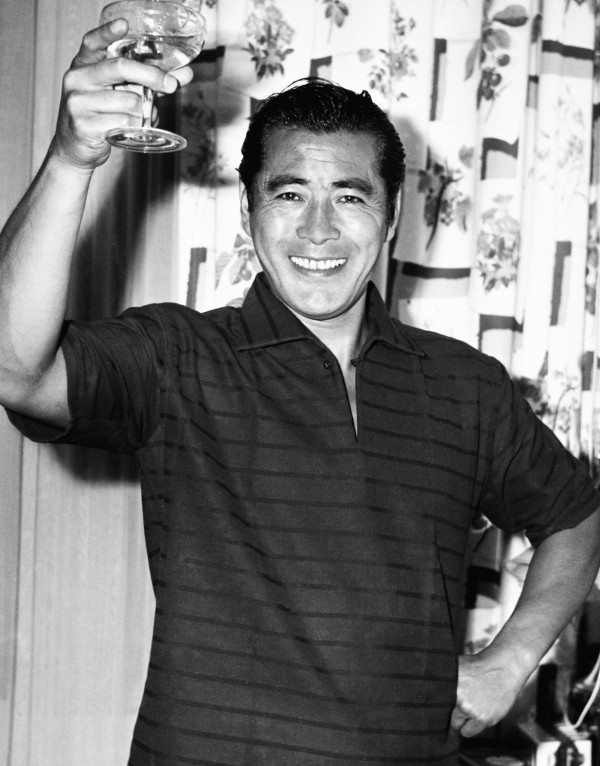 I would have watched Drunken Angel if I had a copy of it, but I don’t. Instead, I started Throne of Blood. It was after midnight here, but it was still April 1st in other parts of the US at the time.

I’d only heard that Kurosawa and Mifune made things up in the early 90s recently, probably via this site. I am someone who thinks Mifune did worthy work outside of his association with Kurosawa, including his work on Shogun, which is the only non-Kurosawa work I’ve seen him in. It’s ironic, though; as much as I like and admire Mifune, I think others — Tatsuya Nakadai, for example — were capable of far more breadth and in that respect were better actors than Mifune. But Mifune was so charismatic and dynamic and so good (and consistent) at what he did well that he far surpassed them in fame.

Some have written than Kurosawa and Mifune reconciled around the time of Ishirō Honda’s funeral in 1993, which both attended. Mifune also visited Kurosawa in Moscow during the production of Dersu Uzala, so it’s not like they weren’t in any kind of contact after Red Beard. Kurosawa may perhaps also have said some things, or was reported as having said some things about Shogun that weren’t really flattering to the production, and Mifune may have been hurt by that.

What we see as a sudden end to the working relationship between the two may well have been a far more gradual and less dramatic process that was largely affected by circumstances: Mifune probably wouldn’t have fit the budget of Dodesukaden, he couldn’t really have been in Dersu Uzala (even if Mosfilm apparently suggested it), and not only was the lead in Kagemusha written for an actor with a whole different set of skills, but Mifune was also attached to Shogun by the time production started. By the time of Ran, the same amount of time had elapsed since Kurosawa’s last film with Mifune as the two had worked together in the first place.

I too have seen relatively few of Mifune’s almost 200 film appearances. I think I have seen most of the films that he did for western productions, and maybe half a dozen or a maximum ten of his Japanese non-Kurosawa films. The most memorable of these is probably the 1992 Shadow of the Wolf. Not because of the quality of the film (which isn’t particularly high), but because it was one of those occasions at the local VHS video rental (this was in the 90s), when you suddenly come across a film that you have never heard of before that features a director or an actor you really like. Those were always the best films.

I think I even ended up buying the VHS tape when the rental sold it. I must have been the only person who ever checked it out.

Its odd in a way, I tend to think of him as older – perhaps because in Red Beard he seems so much older than his 45 years. Having said that, whenever I’ve seen later interviews with him, he always appears to be more lightly built, trimmer, younger and fitter than in most of his post 1960 or so films. Perhaps it was a sort of conscious thing to make himself seem more like an angry grizzly bear, which suits so much of the later characters he played.

I haven’t seen too many of his non-Kurosawa films. He is often very good in the Kobayashi films I’ve seen, although I’ve noticed that in those he doesn’t show the physical grace and comic timing he frequently shows in many of his Kurosawa performances.

I’ve no idea how commonly used the term is, but years ago I read a comment from a Japanese person (in the context of Ozu films) about ‘daikon’ (radish) actors. These are actors who were unskilled, often looked down on by formally trained professional actors, but in the hands of the right director could be highly effective. It does seem to me to be a good description of Mifune – he obviously lacked the range and subtlety of the more conventionally skilled actors like Nakadai or Shimura – but in the right hands he could do things few if any other actors could do.

Whatever the truth of his later relationship with Kurosawa may be, I have to admit that however much I like Nakadai – and I love him in so many of his films – I can’t help but wonder every time I watch Ran as to how Mifune was born to play that part and to regret that he was not cast.

Toranaga in Shogun is the role Mifune was born to play, in my mind. I cannot imagine the miniseries without him. He really impressed Richard Chamberlain, btw.

Ugetsu — I think your remarks about a daikon actor are spot on when it comes to Mifune.

A “radish actor” sounds like a good description of Mifune. Imamura once called him a “ham”, which I found funny.

For me, Mifune belongs to a category of actors who simply own the camera by their very presence. Robert Redford is another one that can command a similar presence by simply being there. A skilled director can utilise this type of almost otherworldly presence. Redford is, of course, also a really good actor (and director, and businessman).

Ugetsu: Whatever the truth of his later relationship with Kurosawa may be, I have to admit that however much I like Nakadai – and I love him in so many of his films – I can’t help but wonder every time I watch Ran as to how Mifune was born to play that part and to regret that he was not cast.

Blasphemy! Nakadai’s performance in Ran is perhaps my favourite performance of anyone in any Kurosawa film. 🙂

According to John Man’s Samurai: The Last Warrior Mifune and Nakadai are both the same guy:

Nakadai from Hara-kiri as Mifune’s Sanjuro in Seven Samurai

According to John Man’s Samurai: The Last Warrior Mifune and Nakadai are both the same guy:

The Guardian thinks so too.... despite being told otherwise by numerous commentators below the line.