It was on this day 110 years ago, on January 15, 1905, that the Japanese actor Kamatari Fujiwara (1905-1985) was born. Fujiwara was one of Akira Kurosawa‘s most frequently used actors, appearing in altogether twelve of the director’s films. He had a part in all but two of Kurosawa’s films from Ikiru (1952) to Kagemusha (1980).

Perhaps the most memorable of Fujiwara’s roles for Kurosawa is his performance as the peasant Matashichi in The Hidden Fortress, pictured above with Fujiwara on the left.

Fujiwara’s characters under Kurosawa also included the paranoid farmer Manzo who in Seven Samurai fears for his daughter, the alcoholic Actor in The Lower Depths, sub-section chief Ono in Ikiru, assistant Wada whom Mifune’s Nishi saves from suicide and then uses for his own revenge in The Bad Sleep Well, as well as the merchant Tazaemon in Yojimbo, the dying Rokusuke in Red Beard, and the old man longing for death in Dodesukaden. 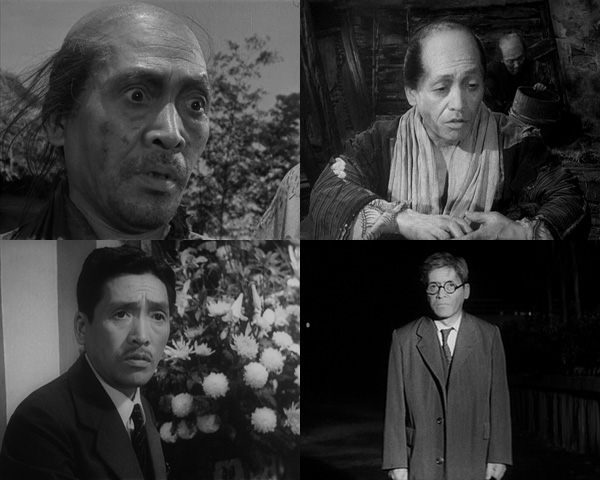 Great character actor – until this post I wasn’t aware just how many Kurosawa films he’d been in – I certainly didn’t connect the actor in The Bad Sleep Well with Manzo in Seven Samurai. I wonder though if he ever asked Kurosawa if he could play a character who wasn’t craven, cowardly, or insanely jealous. I must admit though that I’ve often thought of him as one of those Kurosawa regulars with a tendency to overact a little, to be a bit too theatrical.

Unless I’m mistaken in my calculations, Fujiwara was actually the third most used actor by Kurosawa, after Shimura and Mifune. He indeed seems to have always gotten the less noble characters, but why wouldn’t he as he did so well with them! 🙂

Perhaps there was a bit of overacting, but then again who didn’t overact under Kurosawa. I can’t remember his performances in the other films I have seen with him, but it would be interesting to compare Fujiwara’s performances under Ozu or Naruse to what he did with Kurosawa.