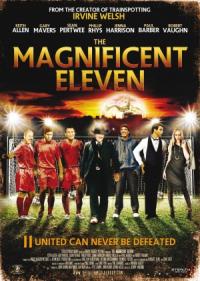 Some years ago, there was buzz about Irvine Welsh writing and directing a soccer remake of The Magnificent Seven. The project, titled The Magnificent Eleven, more or less disappeared from the radar, but it turns out that the film had quietly come out in 2013. I took a look.

So, the first mistake was thinking that this would be a remake and therefore distantly relevant to Seven Samurai. It really isn’t. The basic storyline does serve us the motif of a group of men (here Sunday league footballers) protecting a weaker group of people (a tandoori restaurant) from an attack by bad guys (a gangster played by Vaughn), but this setup is very much diluted in The Magnificent Eleven and at times almost forgotten due to the large number of other story elements.

The second mistake is that I went into the film thinking that it was an Irvine Welsh film. The author, best known for his debut novel Trainspotting, comes with a certain style, genre and content of which we see only fleeting glimpses in The Magnificent Eleven. And indeed, while Welsh had a hand with the script, the film was conceived by Pete Adams and it was directed by Jeremy Wooding. Welsh co-wrote the screenplay with Pete and John Adams, and his website cites scheduling conflicts for the reason why he could not in the end direct, although he did serve as a producer. The end result went straight to DVD, released in May 2013.

So, if The Magnificent Eleven is not a remake or a true Irvine Welsh story, what is it? To be honest, I’m not really sure, but I do know what it wants to be when it grows up: a mixture of The Full Monty, Bend It Like Beckham, East Is East, Brassed Off, and many other similar British comedies.

The problem with The Magnificent Eleven is however that it hasn’t grown up yet. What is filmed feels like an initial treatment, a hodgepodge of ideas which could together make a good film similar to many late 90s British comedy classics. But it seems like that film was never actually written, unless something disastrous happened in the editing room. The use of the Magnificent Seven reference is a good example: it is there, but it is not really employed to a full effect, or really any effect at all to be honest. The same problem exists also with the other plot elements, of which there are many: a Romeo and Juliet love story, a drunken man’s failing marriage, a group of men coming together to save jobs, the problems of a cross-cultural community, a sports team preparing for that one last match, one man’s battle against the criminal underground, and so on. They are all hurriedly dealt with, thrown up in the air hoping that they would somehow magically stick, and as a result all of these little side stories come across as what they are, one dimensional clichés, rather than what they could have been had they been properly developed.

The Magnificent Eleven isn’t a very good film. It is a perfectly harmless one, and at times perfectly enjoyable one, but it is a film that cannot really be recommended.

The Magnificent Eleven is available on DVD in the UK, including from Amazon.co.uk.

I never knew this film even existed! I assume that it never even got a cinema release.

Such a pity it seems so poor (a mere 3.3 on imdb). The idea sounds great, and its a pretty good cast, and of course Welsh knows how to do great dialogue.

It never ceases to amaze me how many films get into production when its obvious that the script isn’t even near ready given how much money even a low budget film can cost to make. I assume that this was green lighted on the basis of what seemed a good commercial idea, and somehow they hoped that magic would happen between shooting and editing, but somehow it just didn’t work.

Yeah, I mentioned it a couple of times in 2009 and 2010, but the film totally came and went (straight to DVD) under the radar. It is a pity that it didn’t turn out better, as it definitely had potential of all sorts.

The film actually isn’t quite as bad as some of the reviews make it, and I believe that the strong negative reaction from many reflects the unrealised potential that it had. When you watch it, you sort of feel like they are wasting everyone’s time, including yours, and that is both disappointing and annoying.